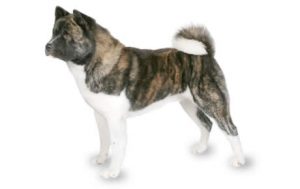 The Akita is devoted to its human family and will courageously protect them if threatened.

Akitas were originally bred for hunting large animals in Japan, including bears. The name ‘Akita’ comes from the name of a snowy mountainous region in Northern Japan where they were first bred and used. Before they had the name ‘Akita’ they were known as ‘snowy mountain dogs’. They were also used for guarding nobles and royals, and became a National Treasure in 1931. Helen Keller was awarded her own Akita puppy when she visited Japan in 1937, and brought the first Akita to America.

During World War II they were in danger of becoming extinct, as they couldn’t find good food, and people killed and ate them. Eventually the government ordered them to be killed to prevent the spread of disease. Some made it through when their owners set them free in the countryside. After World War II, many military personnel came home with Akitas, leading to their growth in popularity in the USA.

Find out the personality you can expect from this breed.
Very fitting for a dog that has guarded royal families, Akitas are dignified and courageous. They are affectionate with their owners but can be aggressive toward other dogs, and are very good at being protective. They are intelligent but also stubborn, so they can be difficult to train. Akitas also have a playful side which they usually only display to close family members who they know well.

Loyalty is a key characteristic of Akitas, and made ‘Hachiko’, a Japanese Akita dog, famous worldwide. His owner was a professor, who would commute to work every day on the train. When he returned from work, Hachiko would go to the train station to meet him. One day the professor suffered a cerebral haemorrhage and never returned from work. Every day for the next nine years, Hachiko continued to go to the train station at the exact time that the train was due to arrive, even though his owner had died.

The Akita will adapt to an apartment so long as it gets regular exercise – although it is most suited to a good-sized yard. It is not the best choice for a first-time dog owner because of its stubbornness, and because it can be difficult to train. You also want to make sure that if you get an Akita that you socialise it with other dogs and people early on so that it doesn’t get too protective and aggressive with strangers. They function best as inside dogs, and like to have companions. Originating from the snowy mountains of Japan, Akitas love cold weather and will happily play around in snow. They will hunt rabbits and squirrels, eat the snow, and roll in it.

They are friendly towards their owners, and deeply loyal. However, because they are very good guard dogs and have a strongly protective nature; Akitas are not so good with strangers. You may need to check with your insurance company before getting them, as they tend to be on the ‘bad breed’ list. They can also be unfriendly towards small animals, and should be supervised around small children.

If they feel that either they themselves, or their human family, or territory is threatened they will start by growling. They will then bite if the threat doesn’t go away.

The Akita is often known for its cleanliness – it doesn’t tend to be messy, and even sometimes cleans its face after eating. They also have a low tendency to drool. A weekly brushing is usually needed, but there are twice-yearly shedding seasons where they will shed more than usual. Daily brushings during the shedding season will help keep your house clean.

Because their coats are weatherproof they don’t absorb dampness which means that they won’t smell like other dogs. You will need to regularly trim their nails and brush their teeth, and groom them weekly.

Not ideal for a first time dog-owner, Akitas are stubborn and independent. However they train well and are obedient if they’re given firm instruction from early on. They are very good at guarding and hunting, and are known for their courage. But this also means they may turn on smaller animals, so are often best kept in a house where they are the only pet. They only usually bark if they feel there is a need to.

When you are training an Akita, you will need to use a confident and firm voice. Make sure he learns to respect you – otherwise he will think he is the leader of the house. Reward him with treats, and don’t use aggression as this will most likely result in him becoming aggressive in return. Socialise him with other people early on so that he learns not to turn on strangers.

Ideally an Akita should be trained to only bite when it’s absolutely necessary. If a puppy bites, you can react verbally with a yelp and then ignore it for a few minutes. Don’t wrestle with him, as this can lead to biting. Also don’t put him by himself when people come around as he may become resentful of visitors.

Akita dogs do well with regular exercise, but keep them on a leash if you’re taking them out in public. A large yard is ideal for them to run around in, but they can manage with smaller areas if they’re taken out for walks. Walks should be taken daily, but they only need moderate exercise.

The Akita does well with twice-daily feedings, and fresh clean water should always be provided. There are some that recommend a weekly fast day. If you do implement a weekly fast, it should only be when they are grown to adult size, and always on the same day of the week. It allows their body to rest, and during this time you would just feed them certain fruit and vegetables.

Akita puppies only need special puppy food till they are 4 to 6 months old. There is extra protein in puppy food which can lead to developmental problems if they are fed it for too long. They are known for being aggressive around food, so make that part of their training and don’t let them get away with growling when you’re there while they’re trying to eat.

The traditional food that was fed to Akitas in Japan was rice, fish and vegetables. If you can keep your food natural and home-made then that is ideal. However you can also feed them high quality dry food that is designed for large breed dogs. A meat-based diet is best, and a soy-based diet is best avoided as it can lead to a lack of thriving.

A regular adult Akita will need about 2-3 cups of dry food a day, although this will vary depending on how much exercise he is getting. You will also want to avoid them bloating, where they eat too much and gulp in air. That’s why it is best to feed them two smaller meals. You can also look into getting a special type of bowl that will help them not to eat too fast, and avoid a raised eating bowl.

One of the most common health problems to face Akitas is bloat, or gastric dilatation volvulus (GDV). The stomach will twist, become extremely painful, and can cut off the blood supply to nearby organs. If they get this they will need immediate emergency medical help. You can watch this video to help you identify what bloat looks like. Try to avoid this by feeding them two meals a day rather than one.

Hip Dysplasia is another condition that is common to Akitas, and usually in their genetics. It may be present at birth, result from an injury, or develop progressively as they get older – often if they are overweight. Some Akitas may suffer from Progressive Renal Atrophy (PRA) which is an eye disease that gradually progresses towards blindness.

Sebacious Adonitis (SA) is a genetic disease where the skin’s sebaceous glands become inflamed. This leads to their skin drying out and hair loss in some areas, which can be uncomfortable for them. The best way to avoid many of these health problems is to find a good breeder who has tested the parents and made sure they are healthy.

Akita How to Get One

Akitas are often purchased without any clear understanding of what goes into owning one. There are many Akitas in need of adoption and or fostering. There are a number of rescues that we have not listed. If you don’t see a rescue listed for your area, contact the national breed club or a local breed club and they can point you toward an Akita rescue.

Above are breed clubs, organizations, and associations where you can find additional information about Akitas.