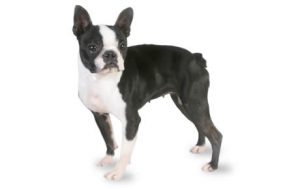 Originally bred to fight in a pit and hunt rats, these sturdy dogs now prefer human company and are playful, gentle and affectionate.

In the United Kingdom in the 1800s, pit fighting was popular – so terriers and bulldogs were sometimes crossed to help produce a good fighting dog. In 1870, an English Bulldog and white English Terrier were crossed, resulting in a dog named Judge. He was sold to an American who imported him to Boston, and then a man called Robert Hooper bought him. He was used to breed with a white and stocky female dog called Burnett’s Gyp. All true Boston Terriers descend from these dogs, according to the American Kennel Club.

Fanciers bred and exhibited them as a breed called ‘Round Heads’, until finally in 1891 the Boston Terrier Club of America was formed, and their name was changed to Boston Terrier. They had tried to call them Bull Terriers but had too much opposition from the Terrier and Bulldog fanciers. The breed was perfected over time using some inbreeding, and with French bulldogs. It was recognized by the American Kennel Club in 1893, and in 1915 Boston Terriers were the most popular dog breed in the US.

Find out the personality you can expect from this breed.
Known as ‘The Little American Gentleman’, the Boston Terrier is intelligent and lively. They like to please their owner, so they train easily. They are also good around children – though as with all dogs, they should be supervised. They tend to be protective, so this can lead to mild aggression when there are other animals and strangers involved. Some dogs can be very gentle, and others more stubborn, depending on their individual personality.

A cross between an English Bulldog and an English Terrier, Boston Terriers look like they have a tuxedo on, and are very cute to look at. Their fine, short coat is either black, brindle or seal, with white markings. Their body and tail is short, and they have strong limbs and muscles. They have a flat nose from their Bulldog origins, which results in a lot of flatulence – so they may be a little smelly at times! Known for their lovable round eyes, this is a small but sturdy breed which produces a lot of smiles. A short coat makes them easy to groom.

Bostons are good at sports, and can be entered into obedience competitions, flyball, agility competitions and more. They have difficulty giving birth, and often only have one puppy.

Boston Terriers are known as a great breed for apartment living, as they are small and only need a couple of walks a day. They adapt well to an active or laid back lifestyle. They are also good gentle dogs for the elderly, and make good watch dogs since they bark when someone comes to the door. Boston Terriers do not like being left alone for long periods though, and this may result in destructive behavior.

You need to watch out in hot weather, as they can overheat easily. With their short nose, they can’t cool the air going inwards as much as other dogs, and their restricted breathing combined with a lot of energy means they get hot easily. So they should be supervised when the weather turns hot, and given lots of water. They also don’t do well in very cold weather because of their short coat, and they shouldn’t live outside.

Boston Terriers are known for being charming and getting along with everyone. However they may become aggressive with strangers or other animals in order to protect their family. They are good with children and are polite and friendly with the family pets. They love to be with their family.

With a short and fine coat, these dogs are easy to groom and take care of. Occasional brushing is usually fine, and their coat doesn’t tend to smell – so a grooming every few months should be adequate. Toenails should be trimmed regularly, and their teeth brushed frequently.

Because of their bulging eyes, their face should be cleaned every day. This will minimize the chances of something getting in their eyes and causing an infection. Also be warned that they do drool.

Though it may take you some time to get a Boston Terrier house trained, in every other area they are easy to train. Eager to please, you can use rewards, treats and positive reinforcement to help you. They tend to be sensitive, so make sure you give them praise too. Watch out for their big eyes though, as they can use their charm to try and manipulate you. There is also a tendency to be stubborn, so they will need firm and consistent treatment.

It is generally recommended that you socialize them early on with a wide mix of people and animals. This will help them develop into a well balanced dog that is easy going and friendly. They tend to bark if there are strangers at the door, but are generally quiet otherwise, though they might need some training to help.

A couple of short walks a day are usually ample exercise for this small dog. A play in the backyard works too – but you really need to get out there and play with them, otherwise they will just wait at the backdoor. They enjoy playing with balls and toys. They are very adaptable and can be very active if you are, or sit and relax if you don’t do very much.

Make sure meat is the first ingredient on the dog food label, so that they are getting enough protein in their diet. Some people recommend dry kibble over canned food to help their breath smell better.

Puppies should be given their mother’s milk until about 3 or 4 weeks of age, when they can be started on solids. Then feed them 3 or 4 times a day until about 8 weeks of age. After that you can move to two meals a day, until 9 months at which point a meal once a day is fine. Small breed puppy food is best to give them when they are young, as smaller breeds usually burn more calories per pounds, so they need a higher calorie content.

Due to their flattened face, Boston Terriers tend to take in a lot of air when they eat. This leads to more flatulence, or gassiness. This can be avoided to some extent by steering clear of corn and wheat when you feed them. A small jaw means that you need to be careful giving them bones. Only small raw bones such as chicken wings should be given to them.

Recommended daily feeding amount: 1 to 2 ¼ cups of high quality dry food a day Boston Terriers like to eat, so it is best to watch their portion sizes so that they don’t gain too much weight.

A cesarean section is often required for a Boston to give birth, as they usually have difficulty with natural delivery. Eye conditions can also occur – like cataracts, corneal ulcers and glaucoma. Boston Terriers have a high tendency to deafness, and also a high sensitivity to anesthesia and heat.

Patellar Luxation is a small dog condition that can affect this breed. It occurs when the thigh bone, knee and calf are not properly lined up, causing lameness. Heart murmurs and allergies may affect them, and also Megaesophagus – which is a defect in their oesophagus making them regurgitate food.

The short heads of this breed means that they are known as Brachycephalic. This condition results in a tendency to snore, snort, gag and reverse sneeze. None of these are harmful to them. Reverse sneezing often occurs if they are excited, gulping air, or affected by pollen.

When buying a Boston Terrier you should look for eye checks, and health clearances for Hip Dysplasia.

Boston Terrier How to Get One

Above are breed clubs, organizations, and associations where you can find additional information about Boston Terriers.