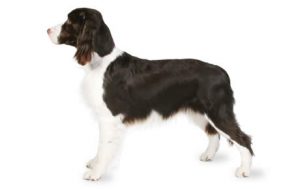 English Springer Spaniels are a breed of spaniel that is known for its ability to ‘spring’ birds from their cover while hunting. They also make good family pets, and are friendly, affectionate and eager to please. Male adults reach a height of 19 to 21 inches, and females a height of 18 to 20 inches. Males weigh 45 to 55 pounds at maturity, and females 40 to 50 pounds.

The springer-type spaniel was bred in the United Kingdom to flush out upland game birds while hunting. They would have the role of finding the birds, ‘springing’ them out of cover, pointing in the bird’s direction with their muzzle, and then retrieving them once they were down. Springer Spaniels were known for their ability to work all day long in bad weather conditions without tiring. They would then come home and provide companionship to the family in the evenings.

Springer Spaniels have been used extensively as detection dogs. Some of them have served with the military abroad, in hunting for explosives. Others are used for drug detection, in prisons, or for sniffing out illegal immigrants. Some mountain teams use them as search and rescue dogs, as they are hard working, and able to navigate rough terrain.

In 1913 an English Springer Spaniel was imported to Canada. They quickly grew in popularity both in Canada and the USA, and competed in dog shows as well as field trials. By the 1940s though, breeders had started to focus their efforts on one or the other. So nowadays they are bred to be good at winning either field trials or dog shows, but not both.

Find out the personality you can expect from this breed.
English Springer Spaniels are full of life, enthusiasm and happiness, with a constantly wagging tail. They are affectionate people dogs, and will bark at visitors but make friends quickly. They need plenty of exercise to stay well behaved and may track some dirt into the house!

This breed has a sturdy build, with a gentle expression on its face and long droopy ears. The coats tend to vary depending on whether they are bred for show or for hunting. Hunting dogs usually have a shorter and coarser coat, whereas show dogs have longer hair. Their coat color is usually either black or brown with white markings, white with black or liver markings, or a mix of the three colors.

English Springer Spaniels need their exercise, so you can live with them in an apartment, but need to make time to give them activity. Ideally they should have at least a medium sized yard to run around in. They don’t like to be left alone for long periods of time and may get mischievous or destructive. They are definitely people dogs, so if you work long hours you should probably choose a different breed.

These Spaniels like to be with their family, with children, and with anyone who will give them some attention. They may bark at strangers, but will make friends with them quickly, so they don’t make good guard dogs. They are good with children, but children should be taught how to interact with them, like not to approach them while they’re eating or pull their tail. Pets and other dogs usually get on fine with this breed, but remember they are bred to hunt birds. So a pet bird might not be such a good idea.

These dogs have a strong desire to please so they are relatively easy to train. Socialization and obedience classes are a good idea to help them develop into a well rounded dog. With their energy and enthusiasm, English Springer Spaniels do need continued training and an active owner who is firm and in control. They have a strong hunting drive so will need to be kept on a leash when they’re outside so they don’t run off after birds. They should also be kept in a fenced in area at home for the same reason.

English Springer Spaniels will generally take as much exercise as you want to give them. They love outdoor activities, hikes and field trips. Long walks or play times will also work well, and ideally a large yard that is fenced in will give them some room to run off steam. They also do well in agility, obedience and tracking activities. These lively dogs can be quite hyperactive if they are not exercised, so if you want your home to remain intact then you will want to make sure they get enough activity.

Try to feed your dog a high quality dog food, as it should pay off in health benefits later. Fresh water should always be available.

When you first bring your puppy home, keep him on the same food your breeder was giving him for a few days, and gradually transition him over. This will help him not to get an upset stomach. Their diet should be a food that is designed for puppies, as they have different nutritional requirements from adults.

Puppies should be fed 4 meals a day till they are about 4 or 5 months old. They can then be transitioned to 3 meals a day, till about 9 months old. By this stage they should generally be fine with two meals a day, although some owners feed them only one meal a day.

Sometimes they may go off their food. If this happens you can try flavoring it with some beef or chicken stock, or mixing in some chicken or beef mince or pasta to give some variety. Be aware that giving them too many table scraps may make them picky so that they go off their normal food. If your Springer Spaniel is especially hyperactive you might want to experiment with giving him some food that doesn’t contain any additives, as some owners claim this calms them down.

Puppies will usually need more food than adults. Food requirements will also vary through your dog’s life, depending on his activity, age and metabolism. Working dogs will need more calories, and dogs that live outside will need more to eat when it is cold.

Pregnant dogs will also need more to eat, especially as they near the end of their pregnancy, and while they’re feeding their puppies. As a guide to making sure your dog doesn’t become overweight, you should be able to see his waistline and feel his ribs.

English Springer Spaniels are prone to Hip Dysplasia as are many other breeds. This results in the thigh bone not fitting properly into the hip socket and can cause lameness. If you buy your puppy from a reputable breeder you can ask for proof that the parents were cleared of having it. It is generally genetic but can also be caused by rapid growth at a young age, or from injuries.

Progressive Retinal Atrophy is another condition that is genetic. The Retina gradually deteriorates, causing night blindness to start with, and eventually daytime blindness as well. Dogs can still live a relatively normal life with this condition, since they get used to where all the furniture is.

Other hereditary conditions include Retinal Dysplasia, which can cause blindness, and Phosphofructokinase (PFK) Deficiency. PFK is an enzyme that the body uses to produce sugar for energy. A deficiency might not give many symptoms, but in severe cases it can cause wasting away of muscles, hyperventilation and fever. It can be tested for using a blood test.

With their floppy ears there is a lack of circulation in the area, so Springer Spaniels do have a tendency to get ear infections. The best way to prevent these is to check and clean their ears regularly and keep them dry. If their ears do get infected then a vet will usually prescribe antibiotics and a daily cleaning solution.

English Springer Spaniel How to Get One

Above are breed clubs, organizations, and associations where you can find additional information about English Springer Spaniels.