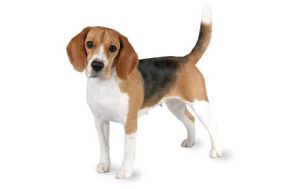 #Originally bred for hunting small animals in a pack, Beagles are very friendly and easy going, and make a great family pet. Male Beagles usually weigh between 22-24 lbs, and females between 20-22 lbs. Male adults grow to a height of 14-16 inches at maturity, and females to a height of 13-15 inches.

No-one is too sure of the exact origins of the Beagle, but it is said that small hound dogs used to hunt in packs for small game in England many hundreds of years ago. It is possible that the word Beagle may come from the Scottish Gaelic word ‘beag’ which means ‘little.’ Beagles were developed by the Reverend Phillip Honeywood who bred them with the aim of using them for hunting.

Beagles were ideal for those who couldn’t afford to hunt with a horse, or preferred to go hunting on foot. They ran slowly enough that someone on foot could keep up with them easily. After the Civil War, they arrived in the U.S., and were popular for hunting rabbits. General Richard Rowett was the first person to start breeding Beagles in the US, and imported them as part of his breeding program.

Find out the personality you can expect from this breed.
Beagles are very friendly dogs, and love to play with adults and children. Bred as a pack hound, Beagles enjoy the company of other dogs and humans. They are good-natured and energetic, as well as being affectionate and gentle. On the downside, they do tend to bark and howl – especially if they are lonely. They are good at escaping, and might surprise you by digging under your fence or climbing over it. So they should not be left out in the yard by themselves for long periods of time as they may well either escape, or annoy all the neighbors with their howling.

Bred for hunting, Beagles have excellent senses of smell. In fact in the United States many airports use Beagles to sniff out food articles that are not supposed to enter the country. The USDA prefer to use Beagles because they have such a good sense of smell, as well as being gentle and small so that people don’t feel threatened. They are very good with children and put up with a lot. However if they can smell something worth tracking they may run off – so they generally need to be on a leash or fenced in.

Beagles can be left at home by themselves and also adapt well to living in an apartment so long as they are given a walk a few times a day. You will just want to make sure that they have enough toys or bones to keep them busy so that they don’t exhibit destructive behavior. Their destructive behavior might include howling, digging, chewing or finding an escape route. One strategy you can use is to hide some dog food in a toy for them to chew on, since they enjoy chewing so much.

The Beagle has been named as one of the best dogs for kids on account of their friendliness, gentleness and happy nature. They can play a lot of games since they were built for hunting, and are very easy going. They are initially cautious around strangers, and bark when they come to the door, but once they get to know them they become friends. However this does mean that they don’t make very good guard dogs.

Beagles do shed moderately year round, and more than usual in Spring. But if you brush them this will reduce the shedding. They are relatively easy to care for, and don’t need bathing too frequently. They do need their nails trimmed regularly.

Although they are easy-going and eager to please, Beagles do have a reputation for being difficult to train because of their stubbornness. If they don’t like what you’re telling them to do they will happily ignore you and wander off. House training can take up to a year, and it is generally recommended that obedience training is started early.

When you are training a Beagle, use treats and rewards rather than punishments. Also be aware that they can tune you out if they find a scent and start following it. So you will need to either keep them on a leash or in an enclosed area where they can’t run off hunting. Once they are trained they are very well behaved, as demonstrated by the ‘Beagle Brigade’ that works professionally at airports around the country.

Beagles ideally need a few walks a day or a yard to run around in. They like being outdoors and have a lot of energy, so without enough exercise they can start to gain weight and get bored. Lack of exercise can also lead to destructive behavior. Make sure you keep them on a leash while exercising so that they don’t go running off after a rabbit!

Most importantly with Beagles, their weight needs to be watched and therefore their food regulated carefully. You can also use food as a tactic to help them not to get bored when they are at home by themselves. You can use a slow release treat, or hide food in various places for them to hunt for while you’re gone.

If you’re getting a new beagle puppy, ask the breeders what they’ve been eating and try to continue with it for a few days. You can then gradually change over to the food you choose – otherwise they can get problems with indigestion and diarrhea.

You can feed your puppy 3 meals a day to begin with, and set their meal times so that they don’t eat too much and get used to routine. Around 6 months old you can gradually transition to 2 meals a day, with one in the morning and one in the evening. Having just 2 meals a day will also allow you some flexibility to give them snacks and treats during the day.

A high-protein diet is best for Beagles since they have a lot of energy and run around a lot. Avoid cereal grains, and look for high quality food that contains meat as a primary ingredient. They can be sensitive to chemical additives in dog food, and some are even allergic to wheat or dairy.

Recommended daily feeding amount: ¾ to 1 ½ cups of dry dog food a day A Beagle’s food is best divided into two meals to allow some extra food intake from snacks and treats. You can add some canned dog food to mix with the dry food. Do keep an eye on his weight – as they love to eat, and if not exercised enough can easily end up overweight. For the same reason it’s best not to leave his food out all day as he will probably overeat. Once they reach 7 years old they will most likely need a reduced amount of food, since their energy level decreases.

Beagles are generally quite healthy dogs. However they can become overweight if they are not exercised enough or if they are fed too much food. This can lead to other conditions such as heart disease and arthritis. Hip Dysplasia is a common genetic condition. It is best to check with the breeder to see if the parents have been tested for it. In Hip Dysplasia, the thigh bone and hip joint don’t fit together as they should, leading to inflammation and then arthritis down the road.

Another health issue that can affect Beagles is Intervertebral disk disease. This is where the jelly-like layer inside the intervertebral disks can push out and into the spinal cord. This can at the very least cause pain, or in its more severe form, cause paralysis, loss of sensation and bowel disorder. Surgery can help, but doesn’t always work.

Other health problems that you might want to keep in mind are hypothyroidism, glaucoma, diabetes, epilepsy and cataracts. It’s difficult to tell whether a puppy has any of these, so again make sure you have a reputable breeder who has screened the parents.

Beagle How to Get One

Beagles are often purchased without any clear understanding of what goes into owning one. There are many Beagles in need of adoption and or fostering. There are a number of rescues that we have not listed. If you don’t see a rescue listed for your area, contact the national breed club or a local breed club and they can point you toward a Beagle rescue.

Above are breed clubs, organizations, and associations where you can find additional information about Beagles.