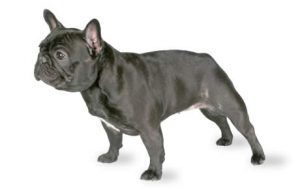 French Bulldogs are beloved companion dogs and very popular in both the United States and United Kingdom. In the UK they beat all the other breeds to the most popular dog in 2017. They are clownish, playful and affectionate – although they also have a stubborn nature. They don’t bark much, don’t need a lot of exercise, and love a cuddle. Adults reach a height of 12 inches. There are two weight classes, of 19 -22 pounds and 22-28 pounds.

In historic Britain, bull-baiting was a popular sport – where Bulldogs would bite the bulls, and then bulls would toss them up in the air. However bull-baiting was eventually outlawed, leaving the Bulldogs without a job. Breeders reduced their size by crossing them with terriers and pugs to make more of a toy bulldog, which became a companion breed. They became popular with British lacemakers in Nottingham, who took them with them to France when they had to move their trade because of the Industrial Revolution.

In France these little bulldogs became popular, and Bulldogs that had faults were imported from England to breed with them. Somewhere along the line they got ears that stood up and looked like bat ears, which is the French Bulldog’s distinctive feature. They acquired their name, and became very fashionable in France with people from all walks of life.

Find out the personality you can expect from this breed.
Even though they don’t bark much, French Bulldogs, also called “Frenchies” make great guard dogs, since are very alert. They are known for their clownish personality, and they are affectionate and charming with their families. They have a calm and relaxed demeanor and are happy relaxing around the house, which makes them a good companion dog for the elderly. However they can be stubborn and independent too – so they are not the best breed for competitions that require training.

French Bulldogs are small, muscular and curious dogs. Their ‘bat ears’ are carried erect, with a broad base and round at the top, and they have round eyes. They have a soft coat which comes in varying colors of fawn, brindle, white, and combinations of those colors. Their legs are short and set quite wide apart, and they have loose and wrinkly skin.

Not terribly active, this breed is fine without a yard and will do well in an apartment. Their short haired single coat means that they become cold easily, so shouldn’t be exposed to extremely cold temperatures unless they have warm clothing. They also don’t do well with very hot temperatures and may get heat stroke. If they live indoors in a hot climate, it is usually recommended that they have air conditioning in the house so that they don’t become overheated. If you have a swimming pool you will need to keep an eye out for them, as they cannot swim and may drown if they fall in the pool.

Even though the “Frenchie” is descended from the Bulldog which was bred to be aggressive, they have come a long way since then. However there are some that can be aggressive, while others are sweet. With firm and consistent training they are generally very well behaved and have a calm and easy going personality. But they are not the best choice for a family with children, and should be supervised at all times when they are with kids. You should also be aware that they love attention, and can get jealous if other dogs are getting attention.

French Bulldogs have a short single coat, so there is not too much shedding. A weekly brushing will keep them looking good and help to distribute natural oils through their skin. The folds on their face will need to be cleaned regularly and kept dry to avoid any build up of dirt which can cause infection. Frenchies do tend to drool, snore and wheeze, due to their short faces.

Training should be carried out in short sessions, because this breed rapidly loses interest and can be stubborn. The best way to train them is with treats and affection as rewards. If you try to discipline them or yell at them then they won’t listen. House training generally takes about six months, so many breeders recommend crating them for this time. Puppy training classes and early socialization will all help to make your dog well rounded and well behaved as an adult.

French Bulldogs don’t need a whole lot of exercise, but a daily walk will keep them in good shape. They don’t need a yard or a large home. Watch out in the summer, as they are prone to heatstroke so shouldn’t be exercised when it is too hot outside. It’s best to only walk them in the morning and evening when it’s cool. Some dogs have a lot of energy, but most are quite lazy.

One or more whole meats should be the first ingredient on your dog food label. You will want to make sure that your dog’s meals are measured out, because often he will eat as much as you give him. Also be careful how many treats you give them. French Bulldogs are small, so one pound of extra weight will show much more than on a bigger dog. Since they have a short muzzle, a shallow feeding bowl is often most helpful for them to be able to eat out of.

Once they have been weaned off their mother’s milk, puppies need three meals a day until about 6 months old. They can then be transitioned to two meals a day – usually one in the morning, and one in the evening. However some people recommend still feeding them three meals a day in smaller amount to reduce the risk of bloat (Gastric Dilatation Volvulus).

French Bulldogs can develop food allergies and sensitivities to some additives and preservatives, so natural ingredients will help to prevent problems. If you are going to try a different food, then switch it over gradually so they don’t get digestion issues. Frenchies can also be quite gassy, so if you want to address this, then you might want to avoid wheat in his diet. If you see them break out in hives, rashes or start itching then take a look at what they’re eating to see if it’s related. They are often allergic to corn.

A French Bulldog who lies around all day will need fewer calories than one that gets a lot of exercise, so you will need to tailor the exact amount of food to your particular dog. Every few weeks check them and make sure that they are not overweight or underweight. Older Frenchies will also need less food than younger dogs, as their activity level and metabolism slows down.

French Bulldogs have a lot of bulk, but a flat face which means that their airway is constricted. Therefore both extreme heat and cold conditions pose a threat to them. Several have also died on airplane flights, leading to a ban on their travel by several airlines. Their short nose and flat face also means that they can experience Brachycephalic Syndrome.

This means that they may have difficulty breathing and swallowing and they might snore and gag. Problems are usually exacerbated in warm humid weather, so these conditions should be avoided where possible. If symptoms are severe then they may need help with breathing, and can be given oxygen. Some types of surgery can also be attempted to help lessen the symptoms – such as shortening the palate, or widening the nostrils.

They are prone to Patellar Luxation, where the kneecap slips in and out of the joint. This can result from injuries or be present from birth. There are also birthing issues with this breed – as they often require artificial insemination because the males have such slim hips that they aren’t able to mount the female to breed with them. Roughly 80% of litters are delivered via cesarean section.

Interveterbral Disk Disease can also affect French Bulldogs. In this condition, a disk from the spine pushes into the spinal cord causing pain, weakness, and maybe even paralysis. It is usually caused by either age, injury or jumping too far, and can be treated with Non-Steroidal Anti-Inflammatory Drugs.

French Bulldog How to Get One

Above are breed clubs, organizations, and associations where you can find additional information about French Bulldogs.