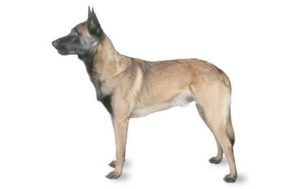 The Belgian Malinois is a highly intelligent and active shepherd dog that forms a loyal bond with his owner, and is used as a working dog in many areas. Adult males grow to a height of between 24-26 inches, whereas females reach 22-24 inches. At maturity, the weight of an adult male is 60-80 pounds, and the female is 40-60 pounds.

In the 1800s, there were four different varieties of sheepdogs that were bred in Belgium, in the area around Brussels. Each one was named for the town or region where it was developed. The Tervuren was long-haired, and developed in the town of Tervuren.

The town of Groenendael was host to the breeding of the black Groenendael with a long haired coat. In Laeken, the Laekenois was developed, and in the city of Malines, the Malinois was bred. In some parts of the world, like Europe, these four breeds are all called the Belgian Shepherd.

During World War I many Belgian Shepherd dogs were used to help with the war efforts, in areas such as the Red Cross, ambulance carts, and for messengers. Many were imported to the Unites States from Belgium between this time and the start of the World War II. Nowadays they are used as working dogs in all kinds of areas, including bomb detection, narcotics, police work, search and rescue, and even to guard the grounds of the White House.

Find out the personality you can expect from this breed.
The Belgian Malinois is very companionable, and forms a strong bond with his owner. They make great watchdogs, since they were bred to look after herds of sheep. However, they are also highly energetic and intelligent so won’t do well if they don’t have enough activity and exercise. Regular training is necessary, since they can bite and nip and become aggressive. If not given enough to do, these breeds also have a tendency to create their own activities, and these might not be good ones!

Originally bred as a sheepdog, the Belgian Malinois is intelligent and agile. A thick topcoat and undercoat gives them protection from the weather, and they have black triangular shaped ears which are always held erect. Muscular and hard working, they are not only athletic, but also regal in the way they hold their head high. As a highly trainable dog, they are used in many different categories of life – in the military, police force, for guarding, and for search and rescue operations. They also do very well in competitions.

Belgian Malinois should not be kept in an apartment as they need a lot of activity. Without enough to do, they will often start barking, chewing and becoming generally destructive. Even though they are highly trainable, they are also not the best choice for the first time dog owner because they can be stubborn and manipulative. Kennels are not good for them, and can cause separation anxiety.

When they are raised with children and animals, Malinois are very good with them. However if you are getting an adult dog, you will want to be careful to make sure that he is suited to being with children as they have different personalities. Also be aware that they do tend to be ‘mouthy’ and chew and nip, so should always be supervised around small children.

They have a high prey drive, and were bred for herding and guarding the sheep, so this can cause problems as they can get possessive or territorial. It is best to train them to get used to animals, children and strangers early on, so they can get used to which guests are welcome and which ones aren’t.

Having a short, waterproof coat makes the Malinois easy to care for. They will need weekly brushing, and during their twice-yearly shedding they might need daily brushing. They can bathed when they are dirty or smelling. They won’t need their coat trimming since it is so short, but their nails will need to be regularly trimmed so that they don’t get problems walking.

Belgian Malinois can be trained to do just about anything a dog can do, and because of this they are used as service animals in many different categories. They train very well and are incredibly intelligent. They can even read your facial expression and know ahead of time what you want them to do.

It is best to train them with positive reinforcement, as they are sensitive and don’t respond well to discipline. They can be stubborn at times, and even bossy if you let them. They were bred as a sheepdog, so they can end up chasing anything moving, like children, animals or cars, if their energy isn’t channeled elsewhere. They will need consistency and firmness, or they can become manipulative.

If you are looking to get a Belgian Malinois as a pet, then exercise is one of the most important factors to look at. They were bred to be working dogs that are highly active, and they are intelligent and enjoy exercise. They need more than just a daily walk, and without enough exercise they will become destructive.

Ideally they need a lot of energetic and interesting activity, and a farm or a house with a big yard is best for them. They enjoy coming alongside you as you hike, run or cycle, and they are really good at competitions that involve obedience, protection, tracking, herding and agility. As the Woof Project Rescue (2014) explains, ‘The Belgian Malinois requires a minimum of 2 hours of training, working or sporting per day for optimal health.’

The Belgian Malinois will generally need a high calorie diet with lots of protein, but you will also need to watch what he eats so that he doesn’t gain too much weight. Meat should be the main ingredient of his diet, and fish can also be used.

When you first bring a puppy home, ask their breeder what they were feeding him. That way you can continue with the same food for a few days and gradually transition over to what you’re planning on feeding him. Since they are large breed dogs that do a lot of work, they will need a higher than average calorie diet that is full of protein in order to help them develop. Make sure that meat is the first ingredient in their food, and that there are also fresh fruits and vegetables.

Many Belgian Malinois breeders recommend a diet of raw food as it has a better nutritional value. It will also help their skin and coat to be healthy. If you are going to be using him as a working dog you will need to be even more aware of what he eats, and think of it as feeding an athlete.

A high protein content is necessary since they use their muscles a lot. You will want to avoid artificial dyes since they have been shown to cause cancer in dogs. And many people also recommend staying clear of grains and soy products. They shouldn’t have too high of a fiber content in their diet as it may be hard for them to digest.

How much you feed your dog will depend on whether he is a working dog or more of a household pet. Obviously if he is working he will need more energy, but either way he can still overeat so you will need to control his portions. It will be hard for him to do certain exercises if he is overweight, and may result in injuries.

The Belgian Malinois is generally a healthy dog, but as with other large breeds is prone to getting Hip Dysplasia and Elbow Dysplasia. These can result in movement difficulties, arthritis and pain. Progressive Retinal Atrophy (PRA), that causes blindness, is another health issue to watch out for, as well as cataract.

They are also prone to epilepsy, and sensitivity to anesthesia. This means that because of their muscle to fat ratio, they have a higher than average risk of dying when put under anesthesia, so do make sure your vet is aware of that if they are going to need it.

Belgian Malinois How to Get One

Above are breed clubs, organizations, and associations where you can find additional information about Belgian Malinois Dogs.