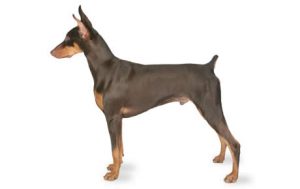 The Doberman was bred to be a tax collector’s dog, and lives up to its breeding – making an excellent guard dog. It is alert, intelligent, trains well and is loyal to its owner.

Karl Louis Dobermann was a German tax collector who had a dangerous job. He traveled through bad neighborhoods and was not well liked because of his profession. Dobermann also owned the local dog breeding center. He used the breeding center to work on making a dog that would be a good protection for him as he traveled. Several different breeds were used to make the Doberman, although unfortunately he did not document his methods very well. It is thought that the primary breeds in the Doberman’s ancestry are the Rottweiler, German Pinscher, Black and Tan Terrier, Old German Shepherd and herding dogs that had smooth coats.

Germany named the dog the Dobermann Pinscher when Mr. Dobermann died in 1894, but the word Pinscher was dropped later, apart from in the US and Canada – who have also dropped an ‘n’ from the name.

During World War I there was a severe decline in the population of this breed because of the lack of food in Europe. The ones that survived were usually either kept by the military, police, or the very wealthy, and not many were bred. Many were brought to the United States at the end of World War I, which helped to keep the breed alive.

Dobermans have been widely used in the military and police forces. One in particular, called Cappy, became famous in World War II when he warned Marines of Japanese soldiers and saved 250 lives. He was later killed by a Japanese grenade and was the first dog to be buried in the war dog cemetery. Twenty five Dobermans died in the battle of Guam.

Find out the personality you can expect from this breed.
The Doberman is intelligent and obedient and trains very well. However he was bred more for being a guard dog than a family companion, so is not known for being affectionate even though he is loyal. Some are shy, while others are more outgoing. They can be domineering and make great guard dogs. Generally they do not aggressively attack people, instead pinning them down until help arrives.

The combination of pointed ears held erect, a wedge shaped head, and a long neck, results in a proud and noble looking dog that will scare people off just by his looks. They have a naturally long tail, but often it will be docked shortly after birth so that it doesn’t get in the way. Docking of tails is illegal in some countries, but part of the breed standard in others. Their ears are often cropped as well, in order to help sound to be more localized so that they will make good guard dogs.

Dobermans are sensitive to the cold and should not be kept outside in cold weather. They can adapt to apartment living so long as they are given enough exercise. If they are left alone for too long they can develop separation anxiety and start to exhibit destructive behavior such as chewing and barking.

Bred to be a guard dog, the Doberman will need early socialization or his natural protective tendencies might go overboard. They were originally bred to be aggressive – but only when commanded to be. But this aggressive trait has been gradually changed over years of breeding, so that they now have a more gentle temperament. However they can still be aggressive with dogs that they don’t know. Generally they are good with children, but are not the best dog for a family with kids, and should always be supervised when they are with children.

Doberman Pinschers shed all year round, but this should be kept under control with a weekly brushing. They don’t need a whole lot of bathing – just a few times a year is usually enough as they are generally clean dogs. Their ears should be wiped every few days and checked regularly for signs of infection, and teeth should be brushed regularly. Exercise outside may wear their nails down naturally, but if they don’t then they will need their nails trimmed too. Their paws should get used to being handled while they are puppies so that they won’t mind it when they are older.

This breed is generally easy to train and sensitive to what his owner wants – but there are some dogs that are more stubborn than others. They need firm and consistent leadership, but not harsh discipline, and they do need to be trained and raised well or they can become domineering. They were originally bred to be aggressive, even though some of this trait has been bred out of them over the years. But as a Doberman owner you will need to be aware of this potential, and that they may bite given the right circumstances.

Doberman Pinschers have a lot of energy and intelligence so they can get bored easily. They need interesting activities and will happily run alongside you as you hike, ride a bike or go for a jog. They like learning new jobs and make great working dogs. Agility competitions are good outlets for them to have an activity to do that keeps them mentally stimulated.

Dobermans are prone to bloat, which can be fatal. If they tend to gulp their food down quickly, you might want to consider getting them a dog bowl that helps them to eat more slowly. Also avoid exercising them directly before or after a meal, and make sure their food is divided into two meals rather than one.

A lower protein food is often recommended for the first few months when you have puppies, and many will stop feeding them puppy food at four months old. Puppies should be fed three times a day for the first 4-6 months of their life.

Avoid food that is high in grains such as corn and flour, and look for one that has meat in the first few ingredients. This meat should be high quality, such as chicken, beef or lamb. Rice and potatoes are good ingredients, but corn, wheat and meat by-products are usually not so good. Fish oil is often recommended as a supplement to give them a source of Omega 3.

If your dog is very active, or takes part in competitions, he will need more food than if he is at home most of the day. So do be aware of his weight and activity level. If they have been spayed or neutered then they generally need fewer calories as well.

Dilated Cardiomyopathy affects more Dobermans than any other breed of dog. In this condition, the heart muscle becomes thin, resulting in a weaker heart that struggles to pump blood around the body. There is no cure, but it can be managed to some extent with medication.

They are also prone to a clotting disorder called Von Willebrand’s disease. This can mean that if they are injured or have surgery, the blood doesn’t clot properly and there will be excessive bleeding. It can be treated with blood transfusions from other dogs, but there is no cure.

Other conditions include Hip Dysplasia, which is less serious but can cause lameness, and Hypothyroidism, which can be managed with medication. Progressive Retinal Atrophy is an eye disease which gradually progresses to blindness.

There is also an inherited condition called Wobbler’s Syndrome which is known to affect Dobermans. In this condition, problems in the spine can cause spinal compression which results in neck pain and can even cause the legs to be paralyzed in extreme cases. Surgery can be attempted, but is not always successful.

Doberman Pinscher How to Get One

Above are breed clubs, organizations, and associations where you can find additional information about Doberman Pinschers.