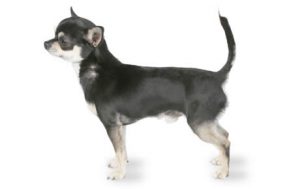 The Chihuahua is known for being the world’s smallest dog, and is an intelligent little creature with a big personality. They are charming, and loyal to their owner, but due to their size are not good for a family with smaller children as they can be easily injured. Adult Chihuahuas reach a height of 6 to 9 inches, and weigh 2 to 6 pounds.

There are many theories around its ancestry, but it is thought that the Chihuahua is descended from the Techichi. When the Toltecs ruled in Mexico a thousand years ago, the Techichi was their favorite companion dog breed. In the 12th century, the Aztecs took over, and they then bred the Techichi into a smaller dog.

By the 1800s, there weren’t very many left, but Americans started to look for them and found many in the state of Chihuahua. Their current name comes from the state of Mexico where they were found.

Find out the personality you can expect from this breed.
Some Chihuahuas are shy, while others are outgoing. Because of their size, their only weapons are their bark and their teeth so they do tend to bark a lot, and can be mean if faced with strangers and think their owner needs protecting. They are very loyal to their owner, and make a great companion dog that can be carried everywhere quite happily. They love attention and like to cause mischief.

Chihuahuas can have either long hair or short hair – with the hair feeling soft and velvety, or like whiskers. There are many different colors, including black, white, fawn, red, chocolate, cream, and brown. A saucy expression and round eyes makes them charming, with large erect ears at the top of their head. They have small dainty feet and usually a furry tail.

These dogs do great in apartments, as their activity mostly constitutes trotting after their owner, and they don’t need a great deal of exercise. As you might imagine, coming from Mexico, Chihuahuas like warm weather but not cold weather. And if it gets cold it is generally recommended that you put a little coat on them when they go outside to keep them warm. They should not be kept outdoors. They are a good dog for first time owners, but not for families with small children.

The Chihuahua is known for being reserved towards strangers, and can be protective of its owner. But generally the furthest it gets towards aggression is barking a lot, so it doesn’t make a very good guard dog. However they get on well with other animals and dogs. They do tend to be devoted to their owners, and bond with them more than anyone else. But they usually are friendly once introduced to someone. They should be socialized and exposed to different people, animals, and situations when they’re young so that they don’t grow up to be timid.

Even though Chihuahuas get on with children, it is not the best breed for them, and often not recommended for families with children under age 8. They are small dogs so can easily be hurt, and also will defend themselves if they feel they need to. Children should be taught to only hold them if they’re sitting down – as Chihuahuas will often jump out of their grasp if they don’t want to be held or are uncomfortable, and can hurt themselves if they jump too far.

Some Chihuahuas are easier to train than others – depending on their parents. They are difficult to house train, and may need a litter box. Bathroom breaks can be challenging when it’s cold and raining because Chihuahuas dislike that kind of weather so much. They are eager to please, but also eager to see what they can get away with, so they need firm consistency and positive reinforcement. This breed can do well in sports and obedience competitions. Barking is common, and they may bite if they feel threatened or mistreated.

Chihuahuas should ideally be walked for short, small walks every day so that they don’t become overweight, but they don’t need a whole lot of exercise. And they can generally meet their exercise needs just by running after their owner. If they are panting and struggling to keep up then you might need to pick them up and carry them. Be careful if you put them in a yard to play though, because they are curious and may be able to squeeze out of a hole in the fence that you haven’t spotted.

Chihuahuas can be sensitive in the feeding department, so this area will need some careful attention. They get anxious, and do a lot better if they’re fed at the same time every day, in the same place. They also have a tendency not to eat if there is a large dog nearby, so it is best to feed them separately.

Under three months old, their food can be left out for them to graze on all day long. 3-4 meals should be given from 3 months to 6 months old, then transitioning to 2-3 meals a day till 1 year old. Usually once they are a year old, two meals a day is fine, so long as they are spaced quite far apart. They can be prone to Hypoglycemia, so watch out for them if they get dizzy or lethargic – particularly if they hasn’t eaten. To treat this you can put a few drops of corn syrup in their mouth, and take them to the vet or animal hospital straight away.

Chihuahuas are sensitive to what they eat, how much, and how often. They don’t tolerate artificial colors and preservatives very well either, so you may need to experiment to find out the type of food that they do best with. Watch out for diarrhea, vomiting, or a failure to thrive, as these can be signals that you may need to change their diet.

The amount of food they eat varies quite a bit depending on the size of the dog and how much activity they get. It will also depend on how many calories are in the food. So you will need to tailor the portion sizes to your own dog. If you’re going to be gone for most of the day you might want to leave a meal-sized portion of food in a toy that they can play with and gradually eat. That way they won’t get too bored or hungry while you’re gone.

Because Chihuahuas are so tiny, often their most common problem is injury. They could be attacked by a larger dog, or choke on something small, or jump out of someone’s arms – and these can all result in injuries. Therefore it’s best to keep them on a leash or in your arms when they’re out and about.

They are also prone to shivering. As an anxious breed, shivering is often a sign of stress or excitement – or it can be simply because they’re cold and trying to warm up. Tracheal collapse is another common condition. They can either be born with a defect in the shape of their trachea, or develop it later. If you hear something like a “goose honk” or see bluish gums when they are excited, exercising, eating or drinking then this might be due to tracheal collapse. It is best to use a harness and leash, rather than a collar, to avoid injury to their throat which can lead to tracheal collapse.

Chihuahua puppies may be born with Hydrocephalus, where they have an unusually over-sized head, and don’t grow very well. Unfortunately these dogs don’t usually have a promising future. Puppies can also be affected by Hypoglycemia – although this is usually avoided by good nutrition and enough food.

Chihuahua How to Get One

Chihuahuas are often purchased without any clear understanding of what goes into owning one. There are many Chihuahuas in need of adoption and or fostering. There are a number of rescues that we have not listed. If you don’t see a rescue listed for your area, contact the national breed club or a local breed club and they can point you toward a Chihuahua rescue.

Above are breed clubs, organizations, and associations where you can find additional information about Chihuahuas.