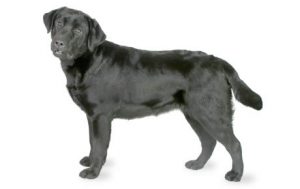 The Labrador Retriever was originally a fisherman’s dog, from Newfoundland, Canada. It would help haul nets to shore and take messages from fishing boats. Later on it was also used as a hunting dog, in naturally swampy environments.

The Labrador Retriever breed came from the St. John’s water dog of Newfoundland. There he was used to retrieve ducks and help fishermen by getting the fish that came from a trawling boat. When English aristocrats visited Canada in the 1800s they spotted some of these and brought them back with them to England.

They called them Labrador Retrievers because they were retrieved from the area of the Labrador Sea, on the coast of Newfoundland, and also to distinguish them from the Newfoundland breed.

The British refined the breed once they had brought it back to the United Kingdom, and used them in hunting. The English saved the breed from extinction, since the dog taxes in Canada made them eventually disappear in that location. In the 20s and 30s some were imported back to the US to revive the breed over there. They grew in popularity and have topped the chart of most popular breed in the US ever since it was started by the American Kennel Club.

Find out the personality you can expect from this breed.
Labrador Retrievers are popular for a reason – they are extremely sweet-natured, friendly, sociable, and eager to please. They are also intelligent and energetic, and make good companions for families that are active. They are patient with children, and love to swim, hike and play fetch endlessly. Labs don’t make good guard dogs though, as they are too friendly to warn off any strangers.

Labradors have an excellent sense of smell and are known for staying on the trail. They are used by both police and military for tracking. They are also used for search-and-rescue, drug and bomb detection, and as service dogs. Their soft mouth makes them good at retrieving water fowl without damaging them, so they are often used for hunting.

A Labrador Retriever makes an excellent choice for a novice owner, as they are eager to please, easy to train, and not aggressive. Because of their energy and size, they are not the best choice for an apartment, although they can adapt to living in one if given enough exercise. They also tend to be clumsy, so will often knock things over in a small space. They have a water resistant coat, and can tolerate cold weather well. As a sociable breed, they shouldn’t be left outside or alone for a long period of time as they may indulge in destructive behavior if they get too bored or lonely.

Friendliness is a hallmark of the Labrador Retriever, so much so that they won’t do a very good job of guarding your house because they’ll most likely make friends with the burglar. They are very patient with children and enjoy playing with them. They will also get on well with other pets if they’ve had plenty of interaction with them. Early socialization is important to expose them to a variety of different people, animals and situations.

Labrador Retrievers need bathing quite often as they tend to smell ‘doggy’ quite quickly and like getting wet and dirty when they’re outside. However they like water, so they don’t mind having baths. With their thick double coat, they also shed quite heavily and will need regular brushing. Ears should be checked and cleaned regularly to help prevent infection. Their teeth should also be brushed every week.

This breed is very easy to train – they are eager to please, love affection and are intelligent and obedient. They can be lively and playful, so it’s often best to start training early on and make them think it’s all a game. Some key commands are ‘stay’, ‘down’ and leash training, as they jump around a lot. Labradors tend to chew, so if you are going out of the house and leaving them by themselves, it is wise to make sure they have had some exercise and have a bone to chew on.

Labradors are very energetic and needs lots of exercise to run off their energy. They should have at least a couple of walks a day, but they also need to run around, otherwise they can become destructive. With their water-dog heritage, they thrive on outdoor activities like swimming and playing fetch. Good choices of activity would also include agility competitions, hunting trips, field trials and dock diving.

Labrador Retrievers are known to eat their food very fast, so you will need to be careful that they don’t get bloat (Gastric Dilatation Volvulus). This happens when they gulp too much air in, so that their stomach fills with air and twists on itself, cutting off the blood supply to vital organs. The condition is potentially fatal, so if you suspect that your dog might have bloat, get him immediate medical attention.

Symptoms include an increased heart rate, distension of the abdomen, rapid panting, and retching. Some owners recommend filling their food bowl with warm water, so that any expansion happens in the bowl rather than in their stomach. Also it is best to avoid exercise for an hour after eating.

Labrador Retriever puppies should be fed on the same schedule and with the same food as your breeder gave them, for the first few weeks. If you’re going to change their diet, do it gradually so that they have time to adjust and don’t get an upset stomach. Puppies should be fed three times a day for the first few months, and then gradually transitioned to twice a day.

Once they get to around ten months old, it is possible to feed them just once a day, but this may also increase the risk of their getting bloat. Feeding a puppy on a schedule will help you with housebreaking, as you have more of an idea when their bowel movements are coming. Once they are around a year old they can be switched from puppy to adult food.

A grain free diet is often recommended by breeders as being healthier and more nutritious for your Lab. Food allergies can be caused by ingredients in their diet like beef, chicken, corn and soy. If you suspect a food allergy, your veterinarian will often recommend switching to a plain diet of a couple of ingredients for a few weeks and if the symptoms clear up then other ingredients can be gradually reintroduced. Often chemical additives and preservatives can cause food sensitivities.

Labradors like to eat, so it can be easy to over feed them. You can check that they have a healthy weight by making sure you can feel their ribs but not see them, and that they have a waist. The more activity they do, the more calories they will need. And food requirements are also affected by their metabolism and age.

Like many other breeds, Labradors are prone to Hip and Elbow Dysplasia, so the parents should be screened by responsible breeders before they are bred. They are also prone to a number of eye conditions, such as Glaucoma, Progressive Retinal Atrophy, Cataracts, Entropion and Ectropion.

Exercise Induced Collapse can occur in young Labrador Retrievers. This is a genetic disorder, which manifests in weakness, leg-dragging, and high body temperature, among other symptoms. Labradors love activity and are high-energy, and if they have this disorder, where other dogs would stop because they get tired, they will carry on until they collapse.

Although this happens rarely, it can cause death. It is more likely to happen when there is humidity and high temperatures. If you know that your Lab has this condition, then it’s best to avoid the kind of activity that brings it on, or stop them at the first sign of weakness and give them water to drink.

Labrador Retriever How to Get One

Above are breed clubs, organizations, and associations where you can find additional information about Labrador Retrievers.