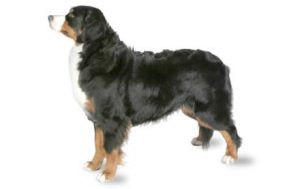 The Bernese Mountain Dog is a hard working dog originally bred as an all-round farm dog.

The Bernese Mountain Dog was bred in the Bern region of Switzerland to work on farms, guard them, and pull carts. Some farmers couldn’t afford to keep a horse, so they would use these dogs to transport produce to town to sell. There was a lot of dairy production in that area that was necessary for Switzerland’s exports of cheese and chocolate. Even now there are still lots of farms in the area of Bern.

The breed almost became extinct due to a lack of interest in them. However in the late nineteenth century both a Swiss innkeeper and a professor searched the country trying to find good specimens, and started breeding them again. It is thought that this small gene pool might be one of the reasons why they are prone to more health conditions than other dogs, and have a relatively low life expectancy.

In 1926 a farmer from Kansas imported two dogs to help on his farm in the US, and their popularity spread from thereon.

Find out the personality you can expect from this breed.
Bernese Mountain Dogs make great companions and love to be around the family. They are affectionate and gentle, but often shy with strangers. They are happy to play, but also calm and relaxed once they’re out of the puppy stage. Bernese Dogs can have slightly differing temperaments, some more reserved and others more active. You can meet the parents of the dog to give you some hints of what the puppies will turn out like. As a large breed they will take up some room in the house, so will need some training on how to behave well.

Bred to work on Swiss farms, this breed is hard working and sturdy. They don’t run fast, but are strong and energetic. Their thick double coat makes them ideal for working in cold conditions. Their coat has three different colors which make it unique – a black background, with rust and white markings on it. They have soft intelligent and gentle eyes, and a long body. With strong muscles in their legs and hind quarters, Bernese Mountain Dogs have been known to pull 10 times their own weight.

Bernese Mountain Dogs do not do well in apartments as they really need to be active outdoors, and they enjoy the cold. They would be better suited to either a farm environment, or with a large fenced in yard to play in. Affectionate by nature, these dogs don’t do well in kennels or being left by themselves for a long time. They enjoy being with the family and joining in all their activities. They are sensitive, so their feelings can be hurt. They also can end up barking a lot if not given enough exercise.

Due to their thick woolly coat, they can be prone to heatstroke so should be kept cool during hot weather. A fan can be used, or air-conditioning, or if they are outside then they should be kept in the shade.

These dogs are great for kids, as they are very gentle and easy going. However they are large, so they may inadvertently knock small children over. They also get on well with other animals. They generally aren’t very aggressive, but can be reserved with strangers. They have a tendency to bond with one owner in particular, and are very loyal.

There is quite a good amount of shedding with this breed, since they have a thick double coat. Weekly brushing is recommended, with daily brushing during the two shedding seasons, in Spring and Fall. Bathing can be done every few months to help them look good and smell nice. Nails should be trimmed regularly. If you hear their nails clicking on the floor then it is time to trim them. Their teeth should also be brushed a few times a week.

Easy to train, Bernese Mountain Dogs are eager to please but also sensitive. So they should be trained with positive reinforcement and rewards rather than harsh correction. They should be socialized early on as part of their training, so that they get used to strangers. If they are left alone for too long they might start behaving in a destructive way, since they thrive with company.

The Bernese Mountain Dog needs regular moderate exercise. A daily walk of about 30 minutes, or a large yard to run around in should be fine. He likes cold weather, but in hot weather can be prone to heat stroke because of his thick coat. So in hot weather, it’s best to save his walks for early morning and late afternoon when the sun isn’t so high.

Some owners like to take their dogs camping and hiking. Another great activity for them is pulling young children in carts. They were bred for cart pulling and have strong hindquarters so this won’t be hard for them.

Good quality dry food should be fed to your Bernese, with 25-27% of protein, and 15-16% of fat. The first ingredient in their diet should be protein, since they are meat eaters, but too much protein can cause problems – particularly if they are not very active.

Ask your breeder for recommendations for the best food for your puppy. Between 2 and 6 months puppies should be given three meals a day, then 2 meals a day after 6 months old. Puppies should generally be fed the same ratio of protein and fat as adults. Bernese puppies grow slowly, and aren’t really considered adults until about two years of age.

It is often recommended that you avoid large breed dog food for these dogs, as it contains added glucosamine and chondroitine sulphate. This is not generally necessary for them unless they have joint problems, and 1tsp of fish oil per day may be a better option.

Raw food is often recommended by breeders and owners of Bernese Mountain Dogs, or a combination of half raw and half dry. However if raw food is too expensive of an option for you, then high quality dry kibble should be adequate. Avoid soy and corn ingredients, as it is hard for them to digest.

Recommended daily feeding amount: 3-5 cups of high quality dry food, divided into two meals a day. Active dogs will need more food than those that are mainly at home, and it’s best to feed them twice a day to avoid them gaining unnecessary weight.

As with other large breed dogs, Bernese Mountain Dogs are prone to getting bloat, which can be an extremely painful and dangerous condition of the stomach. They are also prone to other health conditions and have quite a short life expectancy compared to other dogs.

Cancer is a prevalent disease in this breed, much more than others. Symptoms of cancer may include lumps or swelling, difficulty breathing, or difficulty healing from a wound. Cancer is usually treated with chemotherapy, medication or surgery.

They are also prone to getting hip dysplasia, as with other large breed dogs. If you make sure that you get your puppy from a reputable breeder then they should make sure that the parents are screened. This will help you have the best chance of a healthy dog.

Other common health conditions include Osteochondrosis Dissecans (OCD) which is a cartilage defect. This can in some measure be avoided by not overfeeding during their puppy stage, and making sure they don’t get too much calcium.

Bernese Mountain How to Get One

Above are breed clubs, organizations, and associations where you can find additional information about Bernese Mountain Dogs.