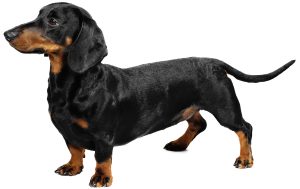 Dachshunds are playful dogs that are affectionate and loyal to their owners. However they are also very independent and stubborn so can be challenging to train. They are courageous and make good watch dogs, since they have a loud bark.

German breeders created the Dachshund from a mixture of French, German and British terriers and hounds. They designed it for hunting badgers, which is where the name comes from – ‘dachs’ meaning badger, and ‘hund’ meaning dog. The Dachshund would find a badger tunnel, burrow into it with its long and slim body, battle the occupant and then bring it out. It had to be brave and aggressive, since badgers have both sharp teeth and claws.

The loud barking characteristic of this breed helped the hunter to locate its dog when it was underground. There were also different sizes and coat types bred selectively to work with different kinds of game, and in various environments and climates. The ears which flap down were bred into the dogs to keep dirt out of the ear canals.

Find out the personality you can expect from this breed.
Dachshunds are known for their stubbornness. The writer E.B.White said, ‘I would rather train a striped zebra to balance an Indian club than induce a dachshund to heed my slightest command.’ However they make up for this lack of obedience by their playful affectionate nature as they like people and will happily cuddle. They do tend to growl and bark at strangers and may also bite.

Also called the ‘sausage dog’, Dachshunds have a long and slim body that is low to the ground with short legs. They have a variety of coats – smooth, long-haired, or wire-haired. Coat colors include red, cream, tan and wild-boar. Red is the most common color, followed by black and tan. Litters of puppies are often born with different colors, as their coat color will depend on which genes the parents have. They have ears which flap forward, and a tail that curves slightly upwards.

Apartments are fine for these dogs so long as they get some exercise – they also don’t need a back yard so are good for people who live in a city environment. They like people and will often develop separation anxiety if they are left by themselves for too long. This can result in destructive behavior such as chewing everything they can find. If they are left outside in the yard they may dig under the flower beds or under the fence.

The Dachshund is friendly and good with children, but not too patient. He may bite if he is mistreated – so children should be taught how to act with him, and also supervised. They make good watchdogs since they stay alert, and bark very loudly. They are reserved with strangers and may growl or snarl, and have been known to bite. If they feel there is a threat to their family they won’t hesitate to jump to the defense. They bark a lot at other dogs but don’t tend to do much more than that.

Occasional bathing is fine unless they have long hair, as most Dachshunds tend to just need a wipe down. They should be brushed once a week unless they are wire-haired – in which case they will need both brushing and bathing more often to keep their coat free of mats and tangles. The dead hair will also need to be pulled out of a wire-haired dog’s coat two or three times a year. Their ears should be checked and cleaned regularly to help prevent infection.

Dachshunds are very difficult to house train – so you might be better off waiting for your breeder to do it before bringing one home with you. They are also difficult to train in general. They are stubborn and like to get their own way, so you will need lots of patience and treats. Due to their hound dog ancestry and breeding, they may wander off after a trail if they scent something interesting.

Not a whole lot of exercise is needed for these dogs, and they don’t need a yard so long as they are given some daily exercise. An occasional run is also good for them. You will need to watch out that they don’t get overweight, and exercise them more if it looks like that might be a problem. A leash should be used, as they may run off after small animals or birds. They shouldn’t be allowed to jump on and off furniture as they may injure their backs. Running up and down stairs is also not good for their backs.

Be careful not to overfeed your Dachshund, as too much weight can lead to various health issues as well as putting strain on their back, and lead to slipped discs. Table scraps are fine, so long as you make sure they are not adding extra weight to your dog – but avoid high fat and processed food. Dry, wet or raw food are all viable options for Dachshunds. Raw food is controversial, but certain proponents of it say that it helps their dog’s coats look better, and that they lose excess weight and are satisfied after every meal. Each situation is unique, so speak with your vet beforehand.

It is often recommended to avoid grains in their diet, as many are sensitive to them. Corn especially can be difficult for them to digest. Fruit and vegetables are important. Dogs do get food sensitivities and allergies – so watch out for symptoms like constant itching, and shaking their heads. Dogs are individual creatures, and some may be sensitive to things that others may not be, so it’s important to tailor your Dachshund’s diet to what he needs.

Recommended daily feeding amount: ½ to 1 ½ cups of high quality dry food every day, divided into one or two meals.

The amount you feed your dog should depend on their metabolism, and how much activity they are getting. And their weight should be watched carefully. The best way to do this is to keep an eye on their figure, and make sure they still have a defined waist.

Because of their long body, Dachshunds are prone to spinal issues. This can happens from jumping off furniture, genetics, or from being overweight. You should always support his back when you’re holding him, and some owners even take their Dachshunds to a chiropractor to help them have a healthy spine. If they get Intervertebral Disk Disease then they may need to be treated with anti-inflammatory and pain medication, and confined to the crate for some time till it improves.

Diabetes can be an issue with Dachshunds, especially if they are overweight, but can be treated with daily insulin injections and diet. Bloat can also affect them, because even though they are not a large breed, they have deep chests. For this reason, be careful to avoid exercise before or after eating, and watch out for symptoms such as retching and lethargy. They should be treated immediately, or it can be fatal.

Also watch out for ear infections. Dachshunds have drop ears, so these are prone to getting infected because of reduced air flow, and should be checked and cleaned regularly. Patellar Luxation, where the knee cap dislodges, can also affect Dachshunds. The wire-haired variety sometimes carries the gene for brittle bone disease.

Double dapples tend to carry the gene for blindness and deafness, so many breeders will refuse to breed a dapple with another dapple for this reason. This is because the dapple genes are ‘dilution’ genes and cancel each other out to create a recessive mutation. If this happens in the ears or eyes it often causes vision or hearing problems.

Dachshund How to Get One

Dachshunds are often purchased without any clear understanding of what goes into owning one. There are many Dachshunds in need of adoption and or fostering. There are a number of rescues that we have not listed. If you don’t see a rescue listed for your area, contact the national breed club or a local breed club and they can point you toward a Dachshund rescue.

Above are breed clubs, organizations, and associations where you can find additional information about Dachshunds.