Yes, in fact bananas are actually quite a healthy snack in moderation. Ideally they should be sliced into small chunks and given as part of a balanced diet.

Can dogs eat bananas you ask; if so, should they? And how?

If you’re anything like me, the mere sound of the word ‘banana’ turns your head and get’s you mouth watering for one of these juicy companions wrapped in yellow.

First, some things you may not know about bananas

They’ve been around for thousands of years, as far as we can tell.

We know this by examining writings recorded way back in 500 BC. But evidence suggest that they were cultivated long before then, as early as 8,000 BC.

We’re not too sure exactly how many were eaten back then on a regular basis, but in today’s day and age, we consume about 100 billion bananas on an annual basis; primarily during breakfast.

Did you know that there are actually over 1,000 types of bananas? Neither did we.

Spanning across 135 different countries, this “fruit” is actually . . . get this, not a fruit at all?

They’re technically herbs, and they don’t grow on trees, but rather “high herbs.”

There’s even speculations about it being the first “fruit” on planet Earth; and some even go as far as to speculate that the forbidden fruit that Adam and Eve consumed may have not been an apple, but a banana. Justifying this speculation with the height of the fruit and size of the banana leaves.

Now, that’s great and all, but are bananas safe for dogs?

In short, yes. Dogs can eat bananas, but in moderation (as with anything else really).

So if your pup had your heart racing by chowing down on a banana, take a few deep breaths.

How much banana can dogs eat? It shouldn’t be the end of the world if they eat the whole banana, but don’t make it a habit. Instead, feed your dog slices of banana as a treat.

They’re actually a pretty healthy snack to share between the two of you. Great news, right!?

As it turns out, bananas are a great source of:

But: They’re pretty high in sugar; on average a medium banana contains about 14g of sugar.

This is why dogs should only eat them as a treat, you don’t want to be feeding your dog all that sugar on the regular by composing their diet primarily of bananas.

Now: Do you feed your dog the whole banana? Just the inside, just the outside?

It’s best to feed your dog the juicy insides, the actual banana, and not the banana peel. They’re not detrimental to your dog, toxicity wise, but they’re tough for them to digest, so best to avoid it.

Pro tip: If your dog has a bug bite, instead of throwing the peel away immediately you can actually use the inside of the banana peel to soothe the itching and inflammation of the skin.

What about the side effects of bananas for dogs? 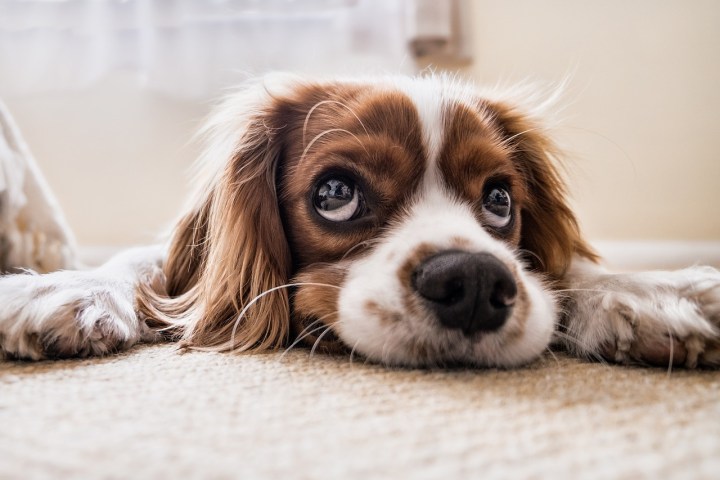 So according to Heather Loenser DVM, the Senior Veterinary Officer over at the American Animal Hospital Association, dogs may be fed bananas only as snack on top of an already complete and balanced commercial diet.

This suggests that there could be some side effects experienced by dogs when it comes to bananas. But what are they?

Well, according to Kerri Marshall, DVM and chief veterinary officer over at Trupanion Pet Insurance, too much banana can lead to constipation. You know, a dog owners worst nightmare come true!

The constipation is mainly caused by eating the banana whole or in large pieces.

Things to do / look for when introducing bananas to your dogs diet:

America’s favorite Holistic Vet, lays it out plain and simple:

Some dogs love bananas and some hate bananas. As long as bananas are just a snack, not the whole meal, and the dog isn’t allergic to the banana, then there’s no reason not to feed them. ~ Cathy Alinovi, DVM

There you have it, if your dog enjoys banana (ooh-na-na’s), then it’s safe to let them keep eating them. But only as treats, and avoid the peel, as it may cause constipation you don’t want to deal with after a hard days work. 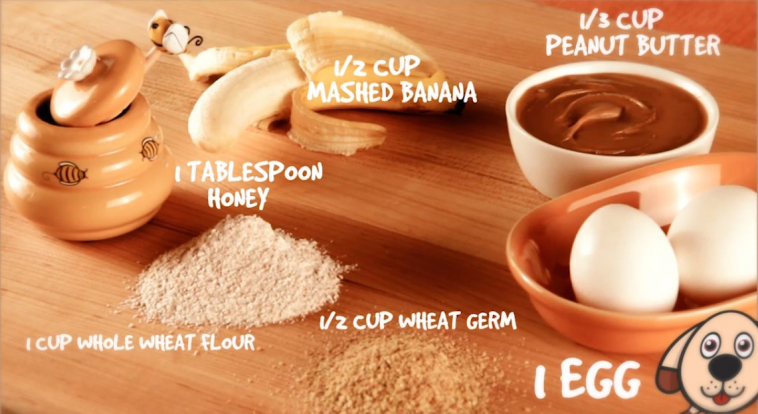 Here’s how to put it all together:

Reward your dog for being such a good boy!

No time to cook?

If you don’t have any free time to cook up some tasty banana flavored dog treats, don’t worry.

These all natural peanut butter with banana dog treats from Wet Noses get the job done! 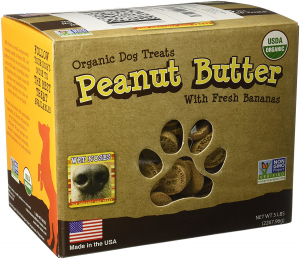 See it on Amazon

These tasty banana flavored treats are:

What ingredients they’re made out of:

Now you know your dog is safe to eat bananas. But don’t forget the other thing we discussed above, and that is moderation. Banana’s should be used as a treat, and try not to feed your dog a whole banana, but rather a couple slices.

As mentioned, you can either throw out the peel, or use the inner side as a natural remedy to alleviate an itch or bug bite. But don’t let them eat it, due to constipation problems.

Hope you learned a lot when it comes to dogs and bananas; and maybe even consider making the above banana flavored dog treat recipe at home for your canine pal.

Note: If you’re looking to find the top food selection for your breed, be sure to check out our comprehensive guides: