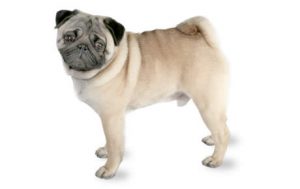 Pugs are small sturdy dogs with a wrinkled, short muzzle and a charming personality. They are affectionate and loving, and like to clown around and get attention. They get on well with children and make a good family pet. Male adults reach a height of 12-14 inches, and females a height of 10-12 inches. Males weigh 13-20 pounds at maturity, and females 13-18 pounds.

The Pug was developed in Ancient China, as far back as 2000 years ago. The Emperors of China liked toy dogs with flat faces, and the Pug was one of these, along with the Shih Tzu. For many years they held them close and would only part with them to give them away as a special gift to an honored person.

However in the 1500’s, some Dutch traders brought Pugs back with them to the Netherlands. It is thought that a Pug saved the life of the Prince of Orange by warning him when Spanish troops were about to attack. The Pug then became the mascot of the royal House of Orange, and when William of Orange became King of England he brought his pugs with him. The name ‘Pug’ may come from the Latin word for fist – ‘pugnus’, because their little head looks like the shape of a fist.

Find out the personality you can expect from this breed.
Pugs love to get attention, and in return they give back a lot of affection and love. They are known for their clowning personality, and are mischievous and fun-loving. They do have an independent streak, but are rarely aggressive, and they get on well with children. Constant companionship is the job they were bred for, and what they like best, so they will often follow their owner around the house wherever they go. They don’t like to be left by themselves and may be unhappy if they don’t receive enough affection.

Small but sturdy, this breed has a comical little face with wrinkles and a flat muzzle. Pugs have a double coat with short hair. Their most common color is fawn, and it can also be an apricot or silver shade of fawn. Black is also a possibility, though not as common. They have rose or button shape ears and a tail that curls tightly. They have an under bite, with their lower teeth sticking out further than their upper teeth.

Pugs don’t need a lot of exercise, so they make good choices for apartment dwellers and those with a small yard. With their flat muzzle they don’t do well in hot weather, as they can’t cool down as easily as other dogs. So it is important to bring them inside when the weather is hot.

Pugs are good with children, and like to play around and be affectionate with them. Even though they are small, they are also tough, so they won’t be easily hurt either. However they should still be supervised when they are with kids, and socialized at an early age to make sure they have got used to a good variety of situations, people and animals. They are very loving towards their families and other people, and will often follow them around the house.

Because of their small size, these dogs are easy to bathe, since they can easily be put in the kitchen sink or a tub to wash. They don’t need trimming because they have such short hair, but on the other hand they do shed a lot. Regular brushing is still good for them though, and they can be bathed occasionally. The wrinkles on their faces should be cleaned every day, since they can easily accumulate dirt and moisture and get infected. Their nails should be trimmed and their teeth brushed regularly. These dogs do drool, snore and snort, so you will need to get used to some funny noises.

Eager to please, this breed is usually easy to train. Some of them are more independent than others though, and house breaking can be a challenge. They are sensitive, so it’s important to use positive methods and not be harsh with them. They don’t yap as much as other small dogs, but they do make good watchdogs and will usually bark to alert you that someone is coming. Since they were bred to be companions rather than hunters, they don’t have a strong prey drive.

Pugs often adapt themselves to the lifestyle of their owner – whether they are more active or a couch potato. They can easily lie around the house all day, so you will need to watch that they don’t gain too much weight. But they are also playful, and enjoy moderate walks and playing in the yard or park. However you shouldn’t take them out when the weather is too hot and humid, as their short flat face makes them unable to keep themselves cool or breathe well in those conditions.

Make sure that you find a high quality food to feed your Pug to help prevent health problems down the road. Look for a good source of protein, and try to ensure that they are getting all the vitamins and minerals they need.

When you first bring your Pug puppy home, you should stick to the same food that your breeder gave him. You can then gradually transition over to what you plan to feed him so that he doesn’t get an upset stomach. From 3 to 6 months they should have three meals a day, then once they get to 6 months, two meals a day is enough. However some people who are at home all day prefer to split up the food into three or more meals even for their adult Pugs.

If you see itching, irritation or an upset stomach in your Pug, it may be from food allergies or sensitivities. Often these can be caused by chemical additives to food, such as preservatives and flavorings. Fillers such as corn, soy, and wheat can also cause problems. If you suspect a food allergy, you may want to simplify your dog’s diet for a few weeks and then gradually introduce other ingredients to see if you can figure out what is causing the problem.

Pugs like to eat, so it’s easy for them to gain too much weight which can lead to health issues. You can often tell whether they are too fat by looking at them from above – they should be narrower in the middle than the shoulders and bottom end. It’s often best to choose healthy treats such as fruit and vegetables to reward them with. Dogs that are more active will need more calories than those who are spending most of the day lazing around the house.

Pugs can easily suffer from heatstroke and breathing issues, which can lead to other problems and even be fatal. So it’s important to watch the temperature and take precautions to keep your dog cool in hot and humid weather. With their protruding eyes, they are also prone to eye problems such as Corneal Disease, Dry Eye, Progressive Retinal Atrophy, Entropion, and more.

One condition which is unique to the breed is called Pug Dog Encephalitis. It causes inflammation in the brain tissue of young Pugs, causing them to have seizures and then die. As yet there is no known cause, test or treatment for this condition.

Because of their short muzzle, Pugs are also prone to ‘reverse sneezing’. This happens when fluid or other debris irritates their throat and makes them snort or gasp. It is not harmful to them, and you can usually help them get over it more quickly by covering their nose so that they breathe through their mouth.

As with many other breeds, Pugs may develop Hip Dysplasia. In this condition, the thigh bone doesn’t fit snugly into the hip socket. This can cause lameness, but with treatment by their vet they should be able to lead a normal life. Epilepsy can also be a problem, which causes them to have seizures. As they get older, some Pugs may experience nerve degeneration. This can cause them to drag their back legs or become incontinent. It may be possible to manage their symptoms with medication.

Pug How to Get One

Pugs are often purchased without any clear understanding of what goes into owning one. There are many Pugs in need of adoption and or fostering. There are a number of rescues that we have not listed. If you don’t see a rescue listed for your area, contact the national breed club or a local breed club and they can point you toward a Pug rescue.

Above are breed clubs, organizations, and associations where you can find additional information about Pugs.