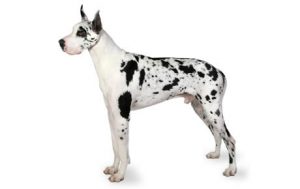 Known as ‘Gentle Giants’, this massive breed is a great companion dog and has all the qualities to be great with children – affection, gentleness and patience. She also has courage and will be protective if she feels it’s necessary. Male adults reach a height of 30-34 inches, and females a height of 28-32 inches. Males weigh 120-200 pounds at maturity, and females 100-130 pounds.

Throughout history large dogs have been bred for hunting, as depicted by frescoes from Greece, rune stones in Scandinavia and skeletons in Copenhagen. In the 16th century many strong dogs with long legs were imported to Europe from Britain. They were originally crosses between Irish Wolfhounds and English Mastiffs.

From the 17th century on, these were bred by German nobility with the purpose of hunting game such as boar, deer and bear. They would seize the animals and hold them down till their master came to kill it. Many of the largest dogs were kept in the house of nobles and wore decorated collars.

Later these dogs became known as ‘German Boarhounds’ but due to increasing tension against Germany in the 19th century their name was eventually changed to the Great Dane. Hunting habits changed and dogs weren’t used as much, so breeders focused on lessening the aggression that it needed to hunt boar and making its temperament gentle. It was marketed more as a companion and luxury dog.

Find out the personality you can expect from this breed.
Bred to hunt wild boar, Great Danes are courageous, intelligent and spirited. However they are also known for being ‘gentle giants’ and are friendly, dependable, patient and gentle – making wonderful family companions. They are sensitive and responsive to training, and good with children. Some Great Danes think they are lapdogs and will try and curl up on your lap even if they don’t fit!

Great Danes have very large, strong, powerful and muscular bodies. Their head is rectangular, and their ears are naturally floppy and triangular in appearance. However they are often cropped, originally for hunting purposes, and now more for cosmetic reasons. When their ears are cropped they are held erect. There are several varieties of coat color possible, including fawn, brindle, harlequin, gray merle, blue, black, and mantle.

Apartments can be OK for this breed so long as there is enough space for them to move around comfortably and they get sufficient exercise. But you will also need to be aware that as a puppy they can be lively and energetic. With their size this can mean things easily get knocked over. The coffee table can probably be cleared with one swipe of their big tail! They shouldn’t be left alone for hours on end as this may lead to loud barking, and they like being with people.

Great Danes are known for their loyalty, affectionate nature and gentle companionship. Even though they are enormous they make great family pets. But you will need to supervise them around children, as a child could easily get knocked over by an energetic Great Dane. They are generally great with kids though, as they are patient and gentle. However they do have a hunting instinct, so will tend to chase cats and other small animals. They will alert their owners to strangers, and will protect them if they feel there is a threat.

With its short coat, the Great Dane doesn’t need very much grooming. But their shedding is quite heavy, especially during Spring and Fall, and they should be brushed weekly. If your dog doesn’t like to be groomed you may prefer to get a professional’s help with trimming his nails and bathing him – as his size will make it more difficult. Their ears should be checked regularly for dirt and wax, and should be cleaned to prevent infection. Their teeth should be brushed at least once a week.

Great Danes should be trained to be obedient since they are large dogs and could become a problem if they get out of control. They should also be socialized from an early age. They are generally eager to please, and do well with consistent and firm training. Training should include learning not to pull on their leash, or you could find yourself taken for a walk instead of the other way around! It may be challenging to train your Great Dane if you inherited him later on his life and he has behavior issues.

The combination of size and energy can result in destruction at times with this huge dog. During puppy and teenage years in particular, they have a tendency to joyfully leap and gallop so they do need some space. However they are house dogs and don’t need a tremendous amount of exercise. Puppies should not be exercised too much in the first few years of their life, to prevent bone formation problems. A fenced yard is good for them, so they have some room to run around, and a daily walk should be enough activity for them. They also do well running along beside you as you go hiking or jogging.

The number one killer of Great Danes is bloat, so it’s important that you feed your dog multiple small meals a day rather than one big one, and also that you don’t exercise him too close to meal times.

Puppies should be fed three times a day until they are 6 months old, and then gradually transitioned to two meals a day. The amount of food you’re giving them will change quite often as they grow, starting at around 2 to 4 cups a day. It can then be increased by 1 cup each month until they are 6 months old and eating between 6 and 9 cups every day.

Once they are nine months old they will need 7 to 10 cups per day, until they are one year old, when they will transition to the amount needed for an adult. If their diet is too high in protein, calcium or supplements, this can lead to improper development. They should have a diet with no more than 25% protein, and shouldn’t be fed puppy food.

Great Danes, like other dogs, may develop food allergies. Often the source of a food allergy is either a protein or a grain, so you could try switching them to a single protein source to see if that helps. Often it is recommended that they be put on a hypoallergenic diet for 6-10 weeks – with ingredients like lamb and rice, and no known food allergens. Then if their symptoms clear up you can introduce other ingredients gradually to try and find the source of the problem.

Recommended daily feeding amount: Male adults should get between 8 and 14 cups and female adults between 6 and 9 cups of high quality dry food divided into two meals a day.

The amount you feed your Great Dane will vary depending on their age, gender, activity level and metabolism. Their appetite can also vary according to their hormone levels, and whether they are spayed or neutered or not.

According to the American Kennel Club, Gastric Dilatation Volvulus (Bloat) is the ‘number one killer’ of Great Danes. It is best to avoid exercise for an hour after a meal to help prevent this condition. Also having a few smaller meals per day rather than one large one should help. You should be aware of its symptoms and get help immediately if you suspect it - as they can die within a few hours.

As with other large breeds, Hip Dysplasia is a common problem. This is where the bone doesn’t fit into the hip joint properly, and can cause limping and lameness. Parents should be tested for it before breeding to help prevent it from happening.

Several types of heart disease can affect Great Danes – including Cardiomyopathy and other congenital heart diseases. Their tendency towards heart disease and their relatively short lifespan has led to the nickname ‘the heartbreak breed’. It is recommended that breeding stock are examined for cardiac conditions.

Some Great Danes develop Bone Cancer (Osteosarcoma), and often at a younger age than other breeds. Its first symptom is usually lameness, and usually the limb has to be amputated and chemotherapy given, to give the dog a year or two more of life.

Great Dane How to Get One

Great Danes are often purchased without any clear understanding of what goes into owning one. There are many Great Danes in need of adoption and or fostering. There are a number of rescues that we have not listed. If you don’t see a rescue listed for your area, contact the national breed club or a local breed club and they can point you toward a Great Dane rescue.

Above are breed clubs, organizations, and associations where you can find additional information about Great Danes.