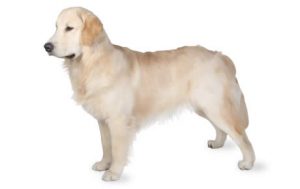 The Golden Retriever was originally bred to retrieve ducks and birds for hunters in Scotland. With their water resistant coat and an instinctive love of water, they are good swimmers and are easy to train. They don’t make good guard dogs though, because they will make friends with anyone – including strangers. Male adults reach a height of 22-24 inches, and females a height of 20-22 inches. Males weigh 60-80 pounds at maturity, and females 55-70 pounds.

In the 19th century, Scottish aristocrats would indulge in hunting for pleasure. However their retrieval dogs weren’t doing a very good job in the water, even though they were fine on land. Consequently, a certain Scottish lord, called Dudley Margoribanks, decided to cross a water spaniel with his yellow retriever.

A Bloodhound and Irish setter were also included in the breeding program. This resulted in the Golden Retriever, which was gentle enough not to harm the birds it retrieved, and powerful enough to run and swim a good distance.

In 1938 the Golden Retriever Club of America was formed. The breed gained a lot of popularity in the US when President Gerald Ford came into power with his beautiful specimen, called Liberty. President Ronald Reagan also owned a Golden Retriever, called Victory. Golden Retrievers are still used for hunting, and for a variety of other roles such as narcotics sniffers, guide dogs for the blind, and comfort dogs.

Find out the personality you can expect from this breed.
Known for taking a while to outgrow their puppy mentality, Golden Retrievers have a silly streak and are usually the most well behaved when they’ve had a good amount of exercise. They make a great family pet, as they are obedient, gentle and patient with children, and friendly with visitors. They are sweet natured, eager to please, and are not aggressive.

The Golden Retriever is large, with a long wavy or straight water-repellent coat that is usually yellow, blond or golden in color. Swimming and fetching things is instinctive to them, and they are hardworking and like to focus on a task. They have a tapered muzzle, with brown eyes and black noses. The British Golden Retriever is typically more muscular with a lighter color coat.

The Canadian type is thinner and taller. And the American Golden Retriever is typically less muscular, with a darker golden sheen to its coat and some feathering. Sometimes American Breeders will import British dogs to use in their breeding program because of their temperament and appearance.

Golden Retrievers are quite large, so not really suitable for apartment living. However they are a good dog for new dog owners, as they are intelligent, eager to please, easy to train and not aggressive. They shouldn’t be left on their own for too long though, as they can develop separation anxiety and start chewing everything in sight!

This breed is known for its friendliness. So much so, that they make terrible guard dogs, since they’re more likely to go up to a burglar wagging their tails and licking them, than to growl and defend their territory. They are very affectionate and devoted to their family and are good with other animals too. Their patience makes them good with children, although they may knock a small child over because of their large size.

Shedding is moderate all year round, but heavier in spring and fall. A weekly brushing will help prevent too much from spreading around the house, and during shedding seasons, a daily brushing is usually needed. Occasional baths can be given, and their nails trimmed and ears cleaned regularly.

Very obedient and eager to please, this breed is highly trainable. Golden Retrievers can be taught to do lots of different things, including therapy, search and rescue, drug sniffing and more. However they should still be socialized at an early age, to help them develop into a well rounded and balanced dog. They can be sensitive, so positive and gentle training methods are important. Leash training should be a priority as otherwise they will tend to pull on the leash and take you for a walk instead of the other way around. Goldens tend to chew a lot, and are happiest when they have a sock, a ball or a toy to chew on.

A couple of daily walks are usually adequate for a Golden Retriever. They are capable of being highly active, but are also very adaptable and will lie down for long periods of time if needed – such as when being used for therapy. They enjoy swimming, hiking, playing fetch, and running alongside you while you cycle. Hunting trips and competitions such as agility, obedience and tracking are also a lot of fun for them.

Two meals a day are usually recommended to help with weight control and avoid bloat. Dry food will help to avoid plaque and tartar build up on their teeth. Homemade food can also be used, but it’s important you consult with a vet before going in this direction, to make sure that your dog gets all the nutrients he needs. A good source of meat should be the first ingredient on the list of a dog food packet.

Golden Retriever Puppies should be kept on a low calorie diet between four and seven months old, as they tend to grow quickly and may develop bone disorders as a result. For the same reason free feeding is probably not a good idea for this breed, as they may eat too much and grow too quickly. For the first three months they should be fed three times a day, and then twice a day after that.

Golden Retrievers may develop food allergies to almost any ingredient. Skin problems may be a symptom of this. If you suspect a food allergy it’s usually best to talk to your vet who will recommend a very simple diet for a few weeks. If your dog’s symptoms clear up, you can then gradually re-introduce ingredients to see which one was causing the problem.

The amount of calories they need will depend on their age, activity level and individual metabolism. Overweight Retrievers can develop health conditions like diabetes, and other conditions can be worsened, such as Hip Dysplasia. So it’s important to keep them a good weight – make sure you can feel their ribs but not see them.

Cancer is a common problem among Golden Retrievers. According to an article in the UK Daily Mail (2015), they used to have a lifespan of 17 years, but now it’s down to about 10 years. The Kennel Club in the UK did a study that showed the leading cause of death to be cancer. The Morris Foundation in Colorado is now undertaking a lifetime study of 3,000 Golden Retrievers to try and narrow down what is causing the problem. The most common cancer that they get is Hemangiosarcoma.

Hip and elbow dysplasia also affect Golden Retrievers, as with many other breeds. To help prevent this from happening to your dog it is best to get him from a reputable breeder who has screened the parents before breeding. Eye conditions include Cataracts, Peripheral Retinal Atrophy, Entropion, Glaucoma, and more.

Golden Retrievers are also prone to certain heart conditions. Subvalvular Aortic Stenosis is one of these, where the path out from the heart becomes narrow. This slows down the flow of blood and can cause fainting or even death. However it can be treated if it’s detected in time.

Allergies are also common – from food allergies, to flea and pollen allergies. Other possible conditions include Epilepsy, Bloat, and Von Willebrand’s Disease. Epilepsy will cause seizures, but can be managed with medication. Bloat, or Gastric Dilatation Volvulus, is potentially fatal but you can try to prevent it by breaking food into more than one meal a day and avoiding exercise before or after meals. Also look out for the symptoms, which include retching, lethargy, drooling and weakness. If you see these you should get him immediate medical attention.

Golden Retriever How to Get One

Above are breed clubs, organizations, and associations where you can find additional information about Golden Retrievers.