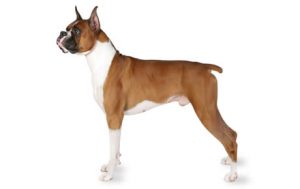 Originally bred as hunting dogs, these strong muscular dogs are loved for their exuberant and affectionate nature. They are also courageous guard dogs and are used by the military, police, and search and rescue. Male adults reach a height of 23-25 inches, and females a height of 21.5-23.5 inches. Males weight 65-80 pounds at maturity, and females 50-65 pounds.

The Boxer was bred in Germany – a part of the Molosser dog group that was bred from a Mastiff-type dog called a Bullenbeisser (German Bulldog), and Bulldogs from Great Britain. Breeders originally bred them as hunting dogs, where their job was to run to the prey and hold it down till their owner arrives.

During World War I the military enlisted the Boxer for messenger work, carrying items, guarding and attacking. After World War II many soldiers brought one home with them which led to their widespread popularity around the world. They have also been used in police work, as service dogs, and as dogs for the blind.

It is thought that its name comes from it being able to stand on its hind legs and box with its paws. However there are other theories, like him being named after a prize-fighter for his ability to fight well.

Find out the personality you can expect from this breed.

Patient, protective and gentle, Boxers are good with children, although they need to be trained not to overpower them and knock them over. They are even-tempered and affectionate – happiest when they are around people, and like to sit on your lap. They love their families and make a loyal and devoted companion.

With high spirits and lots of playfulness, they need training not to jump on people. They have earned the reputation of being headstrong, but this is more likely to be seen when training is too harsh. They make a good watchdog and are courageous when threatened. They are also used for service dogs.

Boxers have a square head and a muscular body. They move like boxing champions, with grace and rippling muscles. Their muzzle is broad and blunt, with a strong jaw. The coat is usually some shade of fawn or brindle, and they may have white markings on their chest, face or paws. Alert, strong and tough looking – they make good bouncers and guard dogs.

About 20-25% of Boxers are born white. Breeders used to euthanize them even though they were healthy, because they didn’t conform to the breed standard. However, breeders now more often give them to families as pets on the condition that they are neutered or sprayed so that they won’t reproduce. You might be wondering what’s wrong with a white Boxer, but it is because they are used in the military that this is said to have become a standard. White stands out, so it does not make for a good camouflage!

Boxers can develop separation anxiety because they are very companionable creatures and get strongly attached to their owner. They can manage in an apartment so long as they are given plenty of exercise.

Their short nose leads to overheating, and they can also get cold quickly because of their short coat. So owners should take appropriate measures during weather extremes – such as making sure they have air conditioning and shade. They should not be outside dogs because of their intolerance to extreme temperatures. Mental stimulation is important for these dogs, so give them plenty of toys to chew so that they are occupied.

Boxers are known as being very friendly, affectionate and good with children. Devoted to their owners, they will often try and lie close to you, and enjoy a cuddle. They are reserved with strangers, but shouldn’t show any aggression if they are introduced to them properly. They may jump up on people unless they’re trained not to. Some aggression towards other dogs can be seen if they’re not used to them. However they are usually good with dogs, but not so good with cats.

Teeth should be brushed daily or at least weekly, and ears cleaned weekly with a cleanser approved by a veterinarian. And of course their nails should be trimmed if you hear them starting to click on the floor, although they may wear them down by themselves if they active.

Boxers are independent and headstrong so will need firm training. If you let them get away with something, they will try and get away with even more next time. Even though they can be stubborn they do train well, as evidenced by their use in the Police force – and they are good at sporting activities.

They should be trained early on not to jump up on people since they have a lot of pent up energy and are enthusiastic. Early socialization is good, and obedience classes are also helpful. They can get bored if they’re asked to do the same thing too many times, so it’s best to make training fun.

Boxers have a lot of energy and need daily exercise. A long walk on a leash is an idea, and a yard to run around in would also be helpful for them to work off some of their playfulness. They enjoy playing ball, but you need to be careful in hot weather as they can develop heatstroke quickly because of their flat face and short nose.

If you like the idea of putting your dog in competitions then this might be something to consider. Some activities that Boxers do well in include Agility competitions, Barn Hunts, Carting and Dock Diving.

A high quality dry dog food should be given to your boxer. You can also mix it with some canned food to make it more enjoyable, and some breeders recommend soaking it in warm water. Don’t supplement too much or you may cause problems in his bones or joints. If you feed him raw food or home cook for him, then do some research to make sure he is getting all the nutrition he needs.

A puppy will drink his mother’s milk for the first four weeks, and then you can gradually introduce solids. Early on they should be fed four meals a day, gradually transitioning to two meals a day by two years of age. Puppies don’t necessarily need a puppy dog food, as they grow quickly and should be able to eat the same thing as an adult so long as you follow the portion guidelines.

As active dogs, they will need a high calorie and protein source. Lean meat should be the primary source of protein in their food, and they should have at least 22% protein. Boxers are prone to food allergies, so it’s best to avoid wheat and corn as they may well be sensitive to them. If a boxer has gas, a spoonful of plain, non fat yogurt can be added to his food daily, which should help.

Recommended daily feeding amount: 2 to 3 cups of high quality dry food a day, divided into 2 meals. A more active dog will need more food than one that is less active, so it is best to measure out portion sizes rather than leave them to feed freely.

Heart conditions are a common problem for Boxers – including Aortic Stenosis and Boxer Cardiomyopathy. In Boxer Cardiomyopathy, there is a problem with the electrical conduction of the heart which can cause erratic beating and sudden collapse, weakness or even death.

Cancer also contributes a significant mortality, as does Bloat, or Gastric Dilitation-Volvulus (GID). You can help them avoid Bloat by feeding them more than one meal a day and trying to make sure they don’t eat too fast. Hip Dysplasia and Hypothyroidism are genetic conditions that can affect this breed, and should be checked for in the parents by the breeders.

Other conditions include Corneal Dystrophy, which is an eye condition that is also inherited. If you see patches of red scaly skin with hair loss, this may be Demodectic Mange. This comes from a little mite which is carried in the hair follicles, and only usually becomes a problem if the dog is immune-compromised in some way.

Boxer How to Get One

Boxers are often purchased without any clear understanding of what goes into owning one. There are many Boxers in need of adoption and or fostering. There are a number of rescues that we have not listed. If you don’t see a rescue listed for your area, contact the national breed club or a local breed club and they can point you toward a Boxer rescue.

Above are breed clubs, organizations, and associations where you can find additional information about Boxers.