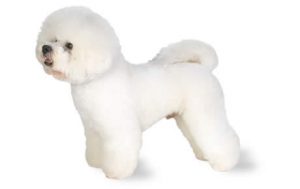 Looking like a cuddly and cute little powder puff, the Bichon Frise charms everyone it meets and is wonderful company. It trains well and is hypoallergenic but doesn’t like to be left alone. The male adult reaches a height of 9-12 inches at maturity, and the female 9-11 inches. They weigh between 12-18 pounds as adults.

This breed is thought to have originated in the Mediterranean, where a large water dog called a Barbet was crossed with a small lap dog. From this came a family of dogs called Barbichons, which were divided up into Maltese, Tenerife, Havanese and Bolognese. The Bichon Frise comes from the Tenerife division, and became popular in Tenerife, on the Canary Islands.

As a cute and playful lapdog, these dogs became very popular among the aristocracy in France and Spain. However the French Revolution in the 18th Century led to many of them being left out on the street when their owners were led to the guillotine. They were taken in by street entertainers and circuses which taught tricks to them and used them to earn money. They again struggled during the First and Second World War, but managed to survive thanks to a few people who rescued them. They were imported to the US in the 1950s where their popularity grew.

Find out the personality you can expect from this breed.
These cute little dogs are very happy and cheerful so long as they are not left on their own for too long. They love being around people and are friendly with everyone – strangers and children, and they like travelling around. Affectionate and playful, they love to cuddle and play.

Bichons look like white powder puffs, with a plumed tail that usually sticks up over their back. They are small and sturdy creatures and have an undercoat as well as an overcoat with coarse white curls. Their coats are hypoallergenic, which is a great asset if you suffer from allergies and are looking for a pet. Large dark eyes make them look curious and gentle, and they also look adorably cute.

Bichon Frises do not need a large amount of exercise so they would be fine with living in an apartment. However you will find that they may start barking if you leave them by themselves for too long. They may also start chewing, crying and even using the house as a bathroom!

A novice owner should do well with them since they train easily, are eager to please, and are gentle and cheerful. They are sensitive, so positive reinforcement is best. However house training can be difficult and be long and drawn out – so you might be better off waiting to get one from the breeder till after he is house trained.

With their double coat, they do tend to get hot, so it is best to use air conditioning if you live in a hot climate. They shouldn’t be left outdoors because their hair can get very dirty and tangled.

These dogs are incredibly friendly, and even do well with strangers. They will bark if someone comes, but make friends very quickly – so they don’t make the best guard dogs. Affectionate and loving, they are great with kids. But at the same time, they shouldn’t be left alone with children and have been known to snap at them.

Grooming can be quite intense with these dogs, since they have a complex and curly coat. They will need a daily brushing, and a professional grooming every month and a half. An easier style of coat to maintain is more like a puppy cut, as opposed to the rounder fluffy cut which is used at shows. It is possible for an owner to learn how to groom a Bichon Frise, but it’s not an easy task.

The ears and toes of Bichon Frises should be trimmed regularly, as too much hair can grow around them. The hair around the face should also be trimmed regularly so that eye discharge doesn’t build up. They are prone to skin problems and allergies, so regularly grooming is important. Baths are also needed quite regularly, since their white coat gets dirty quickly. Their hair should always be brushed before bathing, so that it doesn’t tangle too much in the bath.

House training can be difficult with a Bichon Frise, so you may want the breeder to do it for you. But apart from that one issue, they are intelligent and easy to train and can even do tricks. They are sensitive by nature, so it is best to reward rather than discipline them to avoid hurting their feelings. Formal training and obedience classes are good, especially if carried out early on.

These dogs do have a tendency to bark when they hear visitors come to the door, or if they hear noises. They will also bark if left by themselves for a long time. You can train them to respond to a ‘stop barking’ command, which is very useful. They don’t tend to run away, as they love their family and don’t have a strong herding or hunting instinct.

With a limited amount of energy, this breed is ideal for someone who only wants to take a short daily walk with their dog. They don’t need a huge amount of exercise, just a little every day. Even a short play in the back yard or some romping around the house will generally be enough exercise for them.

According to the Bichon Frise Club of America, the best food to feed your dog is home-cooked, human-grade and unprocessed. However, since most dog owners don’t have the time or money to spend on home-cooking for their dog, the next best option is high quality dry food that is grain free. Real meat is an important ingredient, rather than meat by-products.

Bichon Frise puppies should be fed three times a day until they are 6 months old. Then they should be fed twice a day till they are a year old. After that they can either have one or two meals a day. They generally don’t need a specific puppy formula since they eat almost as much as an adult would.

You may want to consider giving your Bichon Frise a dietary supplement, including vitamins, fish oil and probiotics. They are prone to skin problems and allergies, so good nutrition will help to stave off some of these problems.

Bichons can also be picky eaters. The best thing to do if they refuse a meal is wait until the next meal time – even if it is the following day – to give them their next one. If you give them a second option then that will encourage them to be fussy eaters. You can give them scraps of food you eat, but it’s best not to do it at the table or they will start begging.

Recommended daily feeding amount: ½ to 1 cup of dry food a day, divided into one or two meals.

It can be a good idea to feed Bichons in their crate, as it helps them to feel like their crate is a nice place to be. This can be very helpful when you’re trying them to get them used to the crate – as this may be necessary for house training and for when you leave them by themselves.

Even though the Bichon Frise is hypoallergenic, it often has allergies itself. They can be allergic to dust, pollen, fleas and more. They also are prone to skin conditions – often from scratching themselves. They do live a long time compared to many dog breeds, and are generally healthy. Most conditions that do affect them are not serious enough to cause death.

Bladder stones and bladder infections do cause problems with Bichons, particularly the females. Bladder stones can sometimes be caused by their diet. Patellar Luxation is a problem that may also occur. It is common to small dogs and involves the knee dislocating and sliding in and then out of where it should go. This can cause pain and limping.

Other health conditions that affect Bichons include tooth loss, cataract, hip dysplasia and sensitivity to vaccination.

Bichon Frise How to Get One

Bichon Frises are often purchased without any clear understanding of what goes into owning one. There are many Bichon Frises in need of adoption and or fostering. There are a number of rescues that we have not listed. If you don’t see a rescue listed for your area, contact the national breed club or a local breed club and they can point you toward a Bichon Frise rescue.

Above are breed clubs, organizations, and associations where you can find additional information about Bichon Frise dogs.