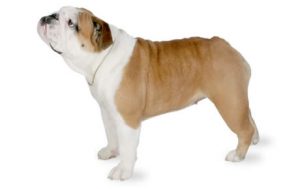 The Bulldog was originally bred for fighting bulls, but later bred to be more docile once the sport was banned. They are courageous and gentle dogs with a stubborn streak. The Bulldog is often used to represent Britain, and is also the official mascot of the United States Marine Corps. Adult Bulldogs reach a height of 12-16 inches. Males weigh 53-55 pounds at maturity, and females 49-51 pounds.

From a cross between a pug and mastiff, the Bulldog was bred to be used in Bull-baiting. Bull-baiting was a popular sport in England in the 1200s through to the 1800s. Mainly for entertaining the crowds, and partly because they believed it would tenderize the bull’s meat, dogs would grab onto the bull’s nose and shake it. The bull would toss the dog up in the air, and the dog would bite the bull in return. Crowds would watch it and be enthralled.

In the 1800s the practice of Bull-baiting was banned in England, and it was thought that Bulldogs would die out. However there were some people that really appreciated the courage and persistence of the Bulldog and wanted to breed it. But they wouldn’t have been acceptable as a pet with the amount of aggression that they had in their character. In Rome, they weren’t even allowed to be walked on a leash because of how fierce they were.

So breeders undertook to make Bulldogs have a more gentle temperament by only using the dogs to breed that were good-natured and calm. They were used as farm dogs, hunting dogs and guard dogs to protect the livestock. Then they were brought to the United States in the 1800s.

Find out the personality you can expect from this breed.

Because of the efforts of breeders to only breed docile Bulldogs after the 1800s, they have a very gentle and sweet temperament. They are also courageous and make great watchdogs. Even though they don’t tend to bark, intruders are usually scared off by their looks. A dignified demeanor is part of the breed standard. They are generally patient, intelligent and eager to please, but also have a stubborn streak. They love people and like to get attention.

Even though Bulldogs have been bred to be docile, they still have an innate sense of dominance from their original history of fighting bulls. So it is possible that they can turn more aggressive if they get used to being dominant over other animals. They can even end up being aggressive towards humans. This usually happens if they learn to get away with this behavior and it becomes a habit.

With a wide stance and stubborn, resolute expression these dogs can look quite mean. They have a thick, heavy-set body that is low to the ground. Their head is square and short with wrinkles on their foreheads and strong jaws. Bulldogs have a waddling gait because their legs are at the corners of their body. With heavy bodies relative to their size, they can be quite a weight if you need to pick them up for any reason. Their flat faces mean that they have a tendency to snore, snort and wheeze.

Bulldogs should not live outside, as they are sensitive to the cold, and overheat easily in hot or humid weather. If you’re going to be outside for the day in hot weather, it can be a good idea to fill a small pool with water so that they can get in and soak if it gets too hot for them. They are not able to cool themselves by panting like other dogs. Apartment living is OK for Bulldogs since they are relatively inactive when they’re indoors, and they don’t need a yard like some breeds. However they will need a commitment to exercise. They are not the best breed for a novice owner since they can be stubborn when it comes to training.

The Bulldog should be kept away from cats as they will chase them, and doesn’t get on too well with other dogs that aren’t familiar to them. As good watchdogs they will bark at new people or visitors, but are generally friendly towards strangers. With children they are playful, patient and affectionate, and form strong bonds. Because of their history of fighting, and the fact that some lines may be more aggressive than others, it is best not to let them off the leash in public.

Year round shedding is the norm with this breed, but it is moderate and can be kept under control with regular brushing. You should wipe their facial wrinkles regularly and dry them after bathing, so they don’t get infected. Daily or weekly brushing of their teeth is important and will help to keep their breath smelling nice. If you handle their feet as puppies this will help them to get used to the idea of their nails being trimmed later, which should also be done regularly.

Bulldogs should be trained while they are young to release whatever is in their mouth when you give the command, to prevent problems later on. They also should be taught to be comfortable with people being around them when they’re eating and even taking food from their bowl so that they don’t get too protective of it.

Generally they are sweet and eager to please. However they have a strong-willed stubborn streak, so need a firm consistent approach. Puppy training classes can be very helpful to show you how to deal with behavior issues. You should always make sure that you are the dominant one, so they don’t start thinking that they are the leader of the pack.

Exercise is very important for Bulldogs, as they can quickly become overweight if they’re not active enough. However they are indoor dogs as a general rule, and don’t need a great deal of exercise. A daily walk is usually fine.

It is best not to leave a Bulldog’s food out all day, as he can become overweight easily by eating too much.

Puppies should be fed four times a day between two and four months old and you can soften their dry food with warm water. Their meals can transition to three times a day from four to six months old. Then they can be fed twice a day once they’re six months old. Once they are a year old you can either stick with two meals a day or just feed them once a day.

Bulldogs don’t need as much protein as many other breeds, because too high of a protein content in their diet can lead to kidney stones and cause other problems. Because of their flat faces and short noses, they are prone to flatulence. You can help decrease the amount of gas they have by giving them small kibble and not feeding them too many table scraps. Also by avoiding windy foods such as beans, soy or milk products.

The amount of food your dog needs will depend how much exercise he is getting. If he becomes overweight it will put a lot of stress on his body, so you do need to be careful to give him appropriate portion sizes.

Most Bulldogs need Cesarean sections in order to give birth because they have large heads and wide shoulders, but small rear ends.

Hip Dysplasia can be a major problem with Bulldogs, as it is quite prevalent. Their hip joints are quite shallow by nature, but they often don’t become problematic unless they are overweight or are exercised too much as puppies.

Keratoconjunctivitis Sicca (KCS) or “dry eye” can be an issue – medication and cleaning the face with a warm washcloth can help. Cherry eye is another health condition that they face. This happens when the gland under their third eyelid sticks out and looks like a cherry.

Bulldogs are also prone to skin fold dermatitis, so it is important that their wrinkles and folds are cleaned regularly and kept dry.

Anesthesia often produces complications in this breed, since they have unusual airways, so you should talk to your vet about this before they undergo any surgery.

Bulldog How to Get One

Bulldogs are often purchased without any clear understanding of what goes into owning one. There are many Bulldogs in need of adoption and or fostering. There are a number of rescues that we have not listed. If you don’t see a rescue listed for your area, contact the national breed club or a local breed club and they can point you toward a Bulldog rescue.

Above are breed clubs, organizations, and associations where you can find additional information about Bulldogs.