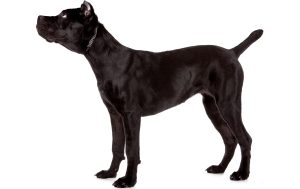 The Cane Corso is a large muscular dog of Italian descent. They make great guard dogs and hunters, and can intimidate strangers just by their powerful bearing and wide jaw. They are protective, devoted to their owners and very possessive of their territory. Male adults reach a height of 24-27 inches, and females a height of 23-25 inches. Males weigh 99-110 pounds at maturity, and females 88-99 pounds.

The Molossians were a Greek tribe in ancient history that used to breed strong and powerful guard dogs. It is thought that when the Roman Empire occupied a large part of the world, Roman soldiers would bring these dogs back to Italy and breed them with Italian dogs. These crosses led to the Cane Corso. ‘Cane’ comes from the Latin word for dog. ‘Corso’ may refer to the type of rural activities they were used for, or it might come from the word ‘cohors’ which means bodyguard. Or it might come from the word ‘corsus’, meaning sturdy and robust.

Cane Corsos were originally used as fighting dogs, and would charge into enemy lines with flaming buckets of oil on their backs. When the Roman Empire declined, they became used in rural work and were often put to work as a farm guard dog. They also drove livestock, hunted wild boar and fought bears. In the 20th century, more machines were used on farms and Cane Corsos neared extinction. But in the 70s a group of breeders worked together to ensure their survival, and in the 80’s started to exhibit them in dog shows. They were imported to the USA, and soon became very popular, ranking in 40th place in 2016.

Find out the personality you can expect from this breed.
Cane Corsos were originally used as fighting dogs in war, and also heavily used as guard dogs – so these roles are a deep seated part of their temperament. They are usually docile and quiet, and will only tend to get aggressive if they perceive a real threat. They are good and gentle with children and loyal to their family, but not interested in anyone else. Socialization is needed for them to get used to other people and animals. Intelligent and alert, they like to have a job to do and thrive on mental stimulation.

Cane Corsos are large, muscular and strong creatures, that can scare people off just by their intimidating appearance. They have a wide and long muzzle which means that they have a strong bite. Their coats are dense with a light undercoat and coarse, short outer coat. Their colors range from black, varying shades of gray, and red, to light and dark shades of fawn. There may be some white patches.

Cane Corsos can live outdoors if they have shelter. They are also OK to live in an apartment so long as they have enough exercise every day. But they are intelligent dogs and need some stimulation – or you might find that their behavior turns destructive. Separation anxiety can result if they are left locked in the house or in a crate all day.

This breed is generally docile but is protective and can turn dangerous if it really feels there is a threat. In fact a jogger was mauled to death by 2 Cane Corsos in 2014. They are very loyal and devoted to their family, but not friendly with strangers. It would be best to get them used to a dog-sitter before they are needed. It is therefore important that this breed is socialized from an early age so that it doesn’t perceive everyone as a threat.

They are good with children they have grown up with – but not the ideal dog for being around children because of their strong bite and potential aggressiveness. If there are children in the family they should always be supervised, and taught how to act with the dog. The Cane Corso may view other animals as prey, so you always need to keep him on a leash and in a securely fenced yard.

The Cane Corso has two coats and will shed lightly year round – a weekly brushing is usually recommended. A wipe down with a damp cloth can also help keep their coat clean and shiny. The length of the coat depends on the heat of the climate they’re living in. Nails should be trimmed every few weeks, but introduce this habit gently when they’re puppies. Start off by just getting them used to you handling their feet. Bathing can be done whenever it’s needed.

It’s important to remember that this dog was bred to be a fighting and guard dog, so good and firm training is very important – otherwise they might dominate the home. They should be crate trained, and not allowed to sleep on the couch or the bed with you – otherwise they may think that they are the leader, since they have the higher ground. It’s also important that they have lots of socialization from an early age so that they are able to reason and evaluate situations in the right way rather than thinking there is a threat when there isn’t.

Cane Corsos are smart and need exercise coupled with mental stimulation, so they need some kind of job to do – even if it’s greeting customers or helping you with the children. They are great for dog sports – and do well in agility, tracking, obedience competitions and more. They can also herd livestock, and learn tricks. As a puppy their exercise should be limited, since they are still growing. Shorter walks are more appropriate when they are young.

Like other large and deep-chested dogs, Cane Corsos are prone to getting bloat. The risk of this potentially fatal condition can be reduced if you feed them more than one meal a day in smaller portions, and try to help them gulp less air with it – a slow feed dog bowl may help.

When you bring a puppy home you should keep feeding them what they’ve been used to for a few days, and then gradually switch over to whatever you plan to feed them in the future. You should watch out for food that contains too much protein and calcium, as it might make them grow too fast and put too much strain on their body. Instead either feed them a large breed puppy food or an adult dog food that is lower in protein until about 2 years of age.

Avoid corn in your dog’s diet, because it is indigestible for them and can also cause allergies. You might also want to consider feeding them a home cooked meal once or twice a week, and raw diets are very beneficial too. But make sure you never feed them cooked chicken bones, as they can break apart inside them and even kill them. Food allergies in this breed can lead to skin infections, so keep an eye out for symptoms of a food allergy and watch for triggers.

The BARF (Biologically Appropriate Raw Food) is also a very good choice for your Cane Corso, as it is good for their digestion, coat, and general health. How much he eats will depend on how much activity he is getting.

The Cane Corso is prone to hip dysplasia as are all large breeds, where the joint of the hip may not join as it should. This is a genetic condition and should be checked for in the parents.

They can also suffer from degenerative joint disease. The risk of this condition can be reduced by keeping them from getting overweight, and make sure they have good nutrition.

Eye problems are also common – such as entropion, ectropion, and cherry eye. You will also need to watch out for bloat, since this is a large breed and prone to gulping air.

Cane Corso How to Get One

Cane Corsos are often purchased without any clear understanding of what goes into owning one. There are many Cane Corsos in need of adoption and or fostering. There are a number of rescues that we have not listed. If you don’t see a rescue listed for your area, contact the national breed club or a local breed club and they can point you toward a Cane Corso rescue.

Above are breed clubs, organizations, and associations where you can find additional information about Cane Corsos.