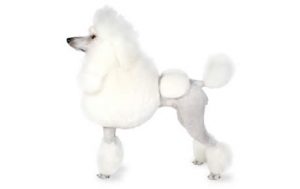 The Poodle is a very intelligent dog, and can perform in many kinds of competitions and shows, including the circus, agility, obedience, tracking, and herding. They are playful, great with children, and love to hunt, swim and play fetch. Adults reach a height of 15 inches or more. Males weigh 45 to 70 pounds at maturity, and females 45 to 60 pounds.

Some experts, such as the American Kennel Club, report that the Poodle originates in Germany. It would have started off as a water dog, with its ability to swim easily making it a good choice for hunting ducks. Some well known dictionaries back this up in their explanation of the Poodle’s name.

They say that it comes from the German word ‘puddeln’ which means to splash in water. However, other organizations clam that this breed originates from the French Barbet, which was also a water dog. The Poodle is very popular in France, and has been adopted as the national dog of France.

The interesting appearance of a show Poodle comes from its history of hunting. Its owners would want it to swim well, so they trimmed most of its hair, but they wanted to leave enough hair on it to keep it warm. This is why it was left longer on the chest. It is thought that the puffs on the tail and legs are from circus performing traditions. Gypsies and travelling performers would teach their Poodles tricks, and then dress them up and give them a fancy appearance.

Find out the personality you can expect from this breed.
Poodles have a naturally curly coat, although for shows it is often shaven, with pom pom type balls left in certain places, like the legs and the tail. They only have one coat, but it is naturally thick and they are considered hypoallergenic because shedding is minimal. Coats come in a variety of colors, such as white, silver, black, brown and apricot. They have a long muzzle with hanging ears.

Poodles have a naturally curly coat, although for shows it is often shaven, with pom pom type balls left in certain places, like the legs and the tail. They only have one coat, but it is naturally thick and they are considered hypoallergenic because shedding is minimal. Coats come in a variety of colors, such as white, silver, black, brown and apricot. They have a long muzzle with hanging ears.

Poodles can do well in an apartment so long as they are given enough exercise. However they really need a chance to run regularly, and daily walks. They also need mental stimulation since they are very smart. Novice owners should be fine with a poodle since they are eager to please, train well and are not aggressive. They are sensitive though, so may not do well in a house with lots of children, noise or stress. With their thick coats, they can get overheated, so it’s best not to take them out in the hot summer sun when it’s humid.

This breed tends to sound off an alarm by barking if a stranger approaches. However once they get to know them, they usually warm up and are friendly. They are great with children, and will be gentle and playful. But they should still be supervised, and the children trained how to treat them properly. Other pets should be fine if they are raised alongside them, but they may need some time to get used to newcomers.

Grooming can be tricky with a Poodle, because he will need brushing every day unless he’s shaved very close. If you don’t brush him daily then the hair will get matted and need to be shaved off. A short trim may be a good option that makes care easier. Many owners will take their Poodle to a professional groomer every 3 to 6 weeks, since it can be a challenging task. However it is possible to learn how to do it yourself, with the right tools and a good guide.

Their nails should be trimmed regularly, and their ears checked and cleaned regularly. Shedding is minimal with this breed, making it a good choice for people who suffer from allergies. Many of these dogs have excessive tearing, so you should wipe down their faces regularly if this occurs.

The Poodle’s intelligence is off the charts, and he is also eager to please – all of which make him very easy to train. Unfortunately though, that means he can learn bad habits easily, just as quickly as good habits, so you need to be careful what you teach him. You can train your Poodle to take part in all kinds of activities, such as dock diving, retriever hunting, agility, and tracking.

An energetic breed, Poodles require quite a bit of exercise. They like to run beside you while you’re jogging, or swim with you in the ocean. They also have a strong retrieving instinct from their hunting background, so a game of fetch will be enjoyable too. A daily walk plus an occasional run should be given at the very least.

Look for a good quality food that has protein as the first ingredient, and avoid meat by-products. Fresh water should always be available.

When you bring your puppy home, start off by giving him the same food that your breeder fed him. Then you can gradually transition over to your choice of diet. Under 3 months old they do best when they can feed freely. Then they can change to 3 meals a day at 3 months. Once they become adults, two meals a day is fine. However you should consult your vet to tailor the diet specifically to your dog.

Poodles may be sensitive to additives and preservatives in their food, so it’s often best to look at the ingredients and try to avoid any possible allergens. You should also be careful with table scraps, since many foods that we eat contain those additives that they might not do well with. Grains and soy can also cause stomach issues, so if they are having problems then you might want to look for a very plain diet with a single source of protein and rice. You can then gradually bring back other ingredients to see which ones are causing the problem.

If you are going to leave your dog at home during the day, it might be a good idea to give him some of his food allowance in a toy that will keep him occupied while he’s alone. Poodles generally don’t overeat, but you still need to be careful how much you feed them. Especially be careful with treats and table scraps, since too much of these might mean that your dog isn’t getting enough nutritional food.

A common health problem in poodles is Addison’s disease. It is caused by a lack of adrenal hormone production, and can result in symptoms of lethargy, vomiting and poor appetite. Sodium and potassium imbalances can result, which are very dangerous – so if you suspect it you should talk to your vet. It can be managed with medication if it’s caught early enough.

Bloat, or Gastric Dilatation Volvulus also has a high probability of occurring in Poodles. This is caused by too much air being taken in when eating, which makes the stomach twist and cut off blood supply to vital organs. Stay aware of the symptoms so that you can take your dog for immediate medical attention if needed. Symptoms include swelling of the abdomen, pacing, retching and restlessness. It is generally recommended that they be given multiple small meals a day rather than just one, and that exercise is avoided before and after meal times, to decrease the risk of bloat.

Poodles can also develop Hip Dysplasia, where the hip socket doesn’t accommodate the thigh bone snugly. This can cause lameness, and breeders should check the parents for this trait before breeding. Cushing’s Disease is another common problem. This is caused by imbalances in their hormone glands, and symptoms include unusual thirst and urination. It can be treated once diagnosed. Another inherited problem is Epilepsy. This causes seizures, which can be scary to watch. However it is usually possible to manage this with medication.

Poodle How to Get One

Poodles are often purchased without any clear understanding of what goes into owning one. There are many Poodles in need of adoption and or fostering. There are a number of rescues that we have not listed. If you don’t see a rescue listed for your area, contact the national breed club or a local breed club and they can point you toward a Poodle rescue.

Above are breed clubs, organizations, and associations where you can find additional information about Poodles.