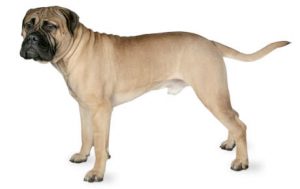 The Bullmastiff was bred to be a guard dog, so he is possessive, loyal and fearless when threatened.

As you might guess from its name, the Bullmastiff was originally bred as a cross between a Bulldog and a Mastiff. In 19th century Britain, there were rich and influential landowners and aristocrats who owned game which they hunted for pleasure. However there were also poor and hungry people who would poach the game so they could eat.

The gamekeepers who watched over the land were at a disadvantage because the land was so large that it was difficult to catch up with a poacher – and of course it was usually dark when they came. Their solution was to try to breed a dog that was aggressive enough to hold a poacher, but not too much so that it didn’t kill it, and fast enough to catch one. They also wanted a dog intelligent enough to obey the commands of the gamekeeper. In crossing the aggressive and strong Bulldog with the less aggressive Mastiff they finally hit upon the perfect combination which brought the Bullmastiff into being. Brindle was the color they aimed for, because it was a good camouflage for night time.

British gamekeepers would show them off at competitions and then dog shows, until the breed was officially recognized in England in 1924. In the USA it was recognized as a breed in 1933. Besides protecting game, Bullmastiffs have also been used in South Africa to guard diamond mines. Nowadays they are also used as farm dogs, to protect livestock and watch over the farm.

Find out the personality you can expect from this breed.
As a family pet, Bullmastiffs are gentle, quiet and good with children. It takes a lot to upset them, and since they were bred to be silent watchdogs, they don’t normally bark. However they do tend to be stubborn so that can make training difficult. They aren’t overly affectionate, but are known for being devoted to their family. They are also fearless if any threats appear on the horizon and they are naturally protective over their family and home.

The Bullmastiff looks like both a Mastiff and a Bulldog because of how it was bred. It has a large, strong and symmetrical body with dark eyes, high-set ears and an intelligent expression. Their color of their coats is fawn, brindle or red, and they may have some white markings on their chest.

Apartment dwelling is OK for the Bullmastiff as they are relatively inactive indoors, however they do need regular exercise and enough space to stretch out. They are not recommended for first-time dog owners since they have a very stubborn streak and need firm and consistent training. They don’t do well with extreme temperatures. They have a short muzzle which makes have a higher chance of getting heat stroke or heat exhaustion. For this reason it’s best to keep them out of the hottest part of the day when exercising, and make sure they have fresh water and shade if they are outdoors in hot weather.

The Bullmastiff is good and patient with children and devoted to his family, though not particularly demonstrative in his affection. However, like most dogs they shouldn’t be left with children unsupervised. They can become aggressive towards dogs that they’re not familiar with – especially males. And unless animals are raised alongside them in the home, they probably won’t do well with them. Early socialization will help them get used to being around other people and animals.

Seasonal shedding is to be expected with this breed, but it should not be heavy due to their short coat. Regular brushing will help with shedding, and also keep their coat looking shiny. They do drool, and are also prone to having bad breath, so their teeth should be brushed weekly. Bathing can be given whenever it is needed and nails should be trimmed a few times a month, unless exercise has worn them down for you.

Training is not easy with the Bullmastiff. They are stubborn and strong willed and will constantly test boundaries, so you need to have rules set in place that you stick to. Early socialization is important for them to get used to being around other people and animals, and puppy obedience classes are a good idea. They are smart though, so can be trained to do tracking, agility, and obedience competitions.

They will need a confident owner who can take the lead and give positive reinforcement. You should also be aware that they don’t like doing the same thing over and over again, so avoid repetition. They don’t tend to bark because of their breeding to be a silent watchdog. They will bite if they feel there’s a threat and it’s necessary.

Relatively inactive, Bullmastiffs don’t need a whole lot of exercise – but short walks are good. They also enjoy playing outdoors, but you should make sure it is in a yard that is fenced in so that they don’t get threatened by animals or people they don’t know. Make sure you don’t give puppies too much exercise, as it can be bad for their development. Also watch out for hotter times of the year as they can overheat easily if they’re exercised during the heat of the day.

Like other large breeds, Bullmastiffs are at risk of getting Bloat, so should be fed two meals a day, so that they don’t gulp their food down too quickly. For this reason, it is also best to avoid exercise before and after meals.

Breeders tend to recommend feeding puppies either large breed puppy food or adult dog food so that they get the nutrients they need while they are growing. While they are puppies they can be fed several small meals a day, transitioning to two meals a day as they grow into adulthood.

It is important to not let your Bullmastiff put on too much weight, as this can lead to other health problems.

The amount of food your dog needs will of course depend on how much activity he does. Some Bullmastiffs are quite inactive, whereas others burn up more energy.

Hip and Elbow Dysplasia are common in Bullmastiffs, which can be identified by hip and elbow exams. They have quite a high incidence of different types of cancer, and bloat can also be an issue – so you will need to be aware of its symptoms so that you can act quickly if it occurs. Bloat (also called GRD) often occurs when dogs with a large chest eat too rapidly or exercise after eating, gulping in more air than they should. It results in too much air in the stomach, which then twists on itself and cuts off the blood supply to organs of the body. It can result in death if they are not seen by a vet immediately.

Progressive Retinal Atrophy can be seen occasionally and is a dominant gene so can be problematic in offspring too. In this disease, the dog will become progressively blind.

Entropion can sometimes affect the eyes of Bullmastiffs. Their eyelids roll inward causing irritation – the main symptom you will notice is if he rubs his eyes. It can be corrected surgically.

There are also heart problems that can affect them. One of these is Subaortic Stenosis, where the aorta narrows so that the heart has to work harder to pump. It can cause fainting and even death, and is usually found when a vet detects a heart murmur.

Hypothyroidism can also affect this breed, so it is recommended that they are screened with a thyroid exam. This can cause a lack of energy, and is caused by an under-producing thyroid gland. A thyroid replacement pill can be given daily for life to manage this condition.

Bullmastiff How to Get One

Bullmastiffs are often purchased without any clear understanding of what goes into owning one. There are many Bullmastiffs in need of adoption and or fostering. There are a number of rescues that we have not listed. If you don’t see a rescue listed for your area, contact the national breed club or a local breed club and they can point you toward a Bullmastiff rescue.

Above are breed clubs, organizations, and associations where you can find additional information about Bullmastiffs.