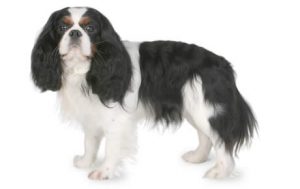 Cavalier King Charles Spaniels are playful, affectionate and endearing to everyone they meet. They are also athletic explorers and love the outdoors, tracking scents, and chasing squirrels and rabbits. They are very friendly to everyone, including strangers, and they adapt well to their owner’s lifestyle. Adult Cavaliers reach a height of 12-13 inches, and weigh 10-18 pounds at maturity.

He even wrote a decree to say that they should be allowed in any public place, including the houses of parliament. They would have them with them when their portraits were taken – so that many years later when this breed was almost extinct, a reward was given for them to be bred again because of these paintings.

An American called Roswell Eldridge offered a cash prize for ‘Blenheim Spaniels of the old type’ as shown in those portraits, if they could be shown in a special class of a dog show. Breeders took this on as a challenge, and the ‘Cavalier King Charles Spaniel’ breed was born. They would breed with the discarded spaniels that had long faces, from the kennels of the King Charles spaniels with short faces. They used all the old paintings as a standard for the breed. After World War II only six dogs survived, because of the struggles of food shortage and bombings, so it is thought that all Cavaliers now descend from those 6 dogs.

Find out the personality you can expect from this breed.
Cavalier King Charles Spaniels are known for their extreme friendliness – they are eager to please, happy to sit on your lap, and love to be around people. This makes them terrible watchdogs – as they will more likely make friends with a burglar than protect you or your house. They like to follow their owners around everywhere they go and make a great companion pet. When they’re outdoors they like to sniff around and explore.

Four color patterns are associated with different British aristocratic families. Tricolor is black and white with tan markings, Blenheim consists of a white background with rich chestnut. Ruby refers to chestnut all over, and Black and Tan dogs have black bodies with tan highlights. They have beautiful soft and gentle eyes, and long silky ears.

Very adaptable, Cavaliers will mold themselves into your lifestyle – whether you’re more active, or like to sit around the house a lot. They shouldn’t be left alone for too long, as they like to be with people. But in the event that you are going to have to leave them alone for long periods, it is best to provide them with a dog or cat for company. An apartment would be just fine for this breed, as they are only moderately active indoors. Ideally a small yard would be good so they can run around.

The Cavalier will make friends with everyone – other dogs, strangers, and children. They may try to chase small creatures like birds, because of their spaniel nature – so it’s best to keep them on a leash when outside. They are playful and affectionate with children. They may or may not bark when someone comes to the door, so they don’t make good guard dogs.

Cavalier King Charles Spaniels should be brushed weekly to keep the tangles out of their coat, and make it shiny. A bath can be given as needed, and their nails should be trimmed regularly. Their ears should be cleaned and checked weekly, because their length makes them more prone to getting infected.

House training might take some time with this breed, as with other toy breeds, but you should be able to accomplish it with some patience and consistency. Cavaliers are eager to please, so are moderately easy to train in other ways, but they are sensitive so should be rewarded with treats and given positive reinforcement rather than harsh discipline. They do well in agility, obedience and rally competitions. Early socialization is good for them to get used to being around different people and circumstances.

As a spaniel at heart, the Cavalier enjoys being outside and active, but is also content as a lap dog with just a daily walk. A small yard is good for him to be able to play around in, but it should be fenced so he doesn’t run off exploring. You will want to use a leash when exercising them, because they still have hunting and prey drives and will happily go off after a trail that they find. Some daily exercise is important, as otherwise they will be more prone to anxiety and other behavioral issues. If you like to hike, you can build them up to longer walks over time.

A high quality food should be fed to Cavaliers, that is formulated for small or toy breeds. There should be a good amount of protein contained in it, to help with growth and development, and of course a good balance of carbohydrates, fat, vitamins, and minerals. The protein should be whole protein, or protein meal. Good food should also contain whole grains and fruits and vegetables. They need a lot of calories because they have a fast metabolism. Fresh and clean water should always be available.

It is best to stick to the same food your breeders were feeding your Cavalier puppy to start with, or it may lead to an upset stomach. Dry food is best for their teeth, and they can be fed four times a day till 6 months old, then three times a day after that. Once they get to a year old, they will be fine with two meals a day – one in the morning and one in the evening. Don’t give puppies table scraps as it will give them a severe case of diarrhoea. They shouldn’t need supplements if they are getting outdoors and getting sunlight, and you’re feeding them properly.

Avoid corn and wheat in their diet, as they often lead to food allergies and don’t contain a lot of nutritional value for the dog. If you do suspect a food allergy it might be worth switching to a limited ingredient diet till it clears up, and then gradually reintroducing other ingredients.

If you’re training your Cavalier to take part in agility or other types of competitions, you may want to switch over to a working or active dog type of food to ensure he has the nutrients he needs. On the other hand, if he lies around the house a lot then you need to watch out that he doesn’t gain weight by eating too much.

Mitral Valve Disease can be a concern with Cavaliers as it is quite common. It starts off with a heart murmur and progressively worsens, turning into heart failure eventually. A cardiac exam is a recommended health test, and breeding parent dogs should be checked as there is a genetic component to this disease. Canine Hip Dysplasia (CHD) is also common – where their hip joint doesn’t function correctly. However many dogs with this condition can still live a normal active lifestyle.

Patellar Luxation is a minor health condition that can affect Cavalier King Charles Spaniels. This is where the knee joint slides in and out of place. It can be a minor discomfort, but can also be crippling in some dogs. There are also eye conditions that they are prone to, so ideally an Opthalmic Evaluation would be given.

Cavalier King Charles Spaniel How to Get One

Above are breed clubs, organizations, and associations where you can find additional information about Cavalier King Charles Spaniels.