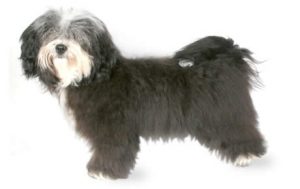 The Havanese is a comical, intelligent and affectionate lapdog who loves to learn tricks and has a tendency to be glued to his owner’s side. He is friendly with everyone but can also become anxious if left alone. Havanese are small dogs and reach a height of 8 to 11 inches, weighing 7 to 13 pounds at maturity.

The Havanese comes from the Bichon family of dogs and is most likely related to the Maltese and Bichon Frise. It is thought that ancestors of the Havanese would have come to Cuba with the Spaniards from Tenerife, as ship manifests list dogs on those journeys.

They became popular among the Spanish colonists in Cuba as lapdogs, and they are named for its capital city of Havana. Often the wealthy and aristocrats would keep a dog such as a Havanese for company and entertainment. It is thought that it might have been crossed with a poodle somewhere along its history of breeding in Cuba.

In 1959 the Communists took over Cuba and many people escaped to the United States, taking their little Havanese dogs with them. American breeders helped to keep the breed going, importing some more along the way. And now they are one of the fastest growing breeds of dogs. Some famous people who owned a Havanese include Charles Dickens, and Ernest Hemingway – both very well known writers.

Find out the personality you can expect from this breed.
Havanese love to be the center of attention, and use their charm and clowning around to get the attention they want. They are very affectionate little dogs and like to be with their family more than anything else, so they can develop anxiety if they are left alone for too long. They do well travelling so will happily accompany you wherever you go, and they are also good watchdogs.

Once called the ‘Havana Silk Dog’ this breed is covered with long silky hair and comes in all kinds of coat colors. Some examples of coat color include white, brindle, fawn, black and cream. They may be a solid color or have markings of different colors. They own a tail with a long plume of hair, and some owners keep their dog’s coat trimmed more than others – although for dog shows it should be kept long.

The Havanese do well in an apartment, as they are small and don’t need a whole lot of space. However they shouldn’t be left alone for long periods of time, since they may develop anxiety. They also don’t tolerate cold weather very well, so their coat should be kept long in winter, and they may need an extra coat to put on if it’s very cold outside. They shouldn’t be left inside as they are indoor companion dogs. First time owners should be fine with a Havanese, since they train easily and are eager to please.

Very friendly and affectionate, Havanese are good with children, and also sturdy so that they won’t get hurt by them. They are most devoted to their family, but will also make friends with other people. However they still need socialization – so puppy classes are good for them, and also taking them out regularly or inviting people over will help. They are friendly with other dogs and with strangers too, although they will alert you if someone is coming, so they can make good watchdogs.

You can choose to either keep their hair long or short. If you are going to show your dog then it will need to be long, but short hair is easier for grooming. Their coat can easily get dirty and matted, so often a weekly bath is a good idea, but they don’t shed much so that helps keep it tidy around the house. If your dog has long hair then they will need daily brushing, but even with shorter hair, brushing them a few times a week is best to distribute their natural oils and prevent their hair matting. Their face should also be wiped daily, since they have a tendency to have tear stains, and regular brushing of their teeth is important. Because of the amount of hair around their faces, you may need to use some tangle remover to soften any food that is caked in the hair.

A common complaint about the Havanese is its tendency to bark at anything that goes by the window. However you can train them to stop barking on command, and they don’t bark as much as some other dogs. They are intelligent and easy to train, and also delight to do tricks to amuse people. They can be difficult to house train though, so some owners resort to a litter box or a dog door.

Even though they are very active and lively, Havanese don’t need a whole lot of exercise, and one or two walks a day is fine. They also don’t need a yard so long as they are getting exercise some other way. They are happy just to play around inside the house with you. But since they are little, you will need to be careful when you exercise them. They may struggle if the walk is too long, so if you see them panting and lagging behind it is best to pick them up for the rest of the walk.

Havanese have the nickname of ‘velcro dogs’ since they stick to your side as much as they can. This also means that they have a tendency to bring their food with them if you leave the room – just so that they can stay by your side. They will wander all over the house, going back to get some more food so they can eat it next to you. Small breeds are very easily spoiled, so watch out for the temptation to feed them too many treats as they can become overweight - which leads to health issues.

When you first get your Havanese puppy you should keep him on the food that his breeder was giving him. They have sensitive stomachs, so it’s best not to feed them table scraps or treats, as it can make their bowel movements very soft. It is also best to let them free feed for the first three days when they get home with you, then switch to three times a day. They can transition to two meals a day once they are 6 months old, and stay on that schedule from then on.

When you’re looking at the ingredients of your dog food, make sure that protein is the first ingredient on the list – preferably not a meat by-product. Avoid corn, as this often causes digestive problems or food sensitivities. Also be aware that they can be quirky eaters and not always finish their food – but you shouldn’t feel like you have to switch their dog food every time. They might just not feel like eating very much that day.

Havanese don’t usually overeat, but you still need to be careful that you don’t spoil your dog with too many treats so that weight becomes a problem. You want to be able to feel his ribs with your hands, but not actually see them.

Havanese have a long lifespan and are generally healthy, but there are still some conditions that may affect them. One of the most common is patellar luxation, where the knee cap, thigh bone and calf bone are not lined up properly. This can cause lameness and usually requires surgery to fix it. They can develop eye disorders, such as cataracts and retinal dysplasia, so an eye exam is often recommended.

Hip Dysplasia and Elbow Dysplasia are degenerative diseases that can affect the hip or elbow. They can usually be treated with medication, weight management and surgery. There is also a genetic condition called Chondrodysplasia that can affect Havanese. This results in short limbs which can be crippling, and if a dog has this condition it should not be bred.

Occasionally they can be affected By Legg-Perthes disease where there is a decrease in blood supply to the femur bone at the hip joint, resulting in arthritis and inflammation. Usually the femoral head has to be removed, and rest and physical therapy given.

Havanese How to Get One

Havanese are often purchased without any clear understanding of what goes into owning one. There are many Havanese in need of adoption and or fostering. There are a number of rescues that we have not listed. If you don’t see a rescue listed for your area, contact the national breed club or a local breed club and they can point you toward a Havanese rescue.

Above are breed clubs, organizations, and associations where you can find additional information about Havanese.