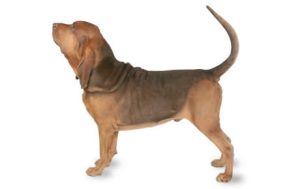 Docile and friendly, the Bloodhound makes a great companion and family dog. However he can also be very stubborn and independent. Bred as a hunting dog, he is an exceptional tracker, and is known for sticking to the scent of a human or animal till he finds the source. Male Bloodhounds grow to a height of 25-27 inches, and females to a height of 23-25 inches at maturity. Males weigh 90-110 pounds, whereas females weigh 80-100 pounds.

It is thought that the first bloodhounds came from the Mediterranean. They were then bred to perfection in the monasteries of Belgium, France and England. In France, Bloodhounds are given the name of ‘St. Hubert Hounds’ since the monk St. Hubert was one of the prominent breeders.

The name ‘Bloodhound’ may come from the dog’s extraordinary ability to track scent and blood. When poachers and thieves would hunt for game, the dog could follow the trail of the blood and find them. An alternative explanation is given by the AKC, which states that their name comes from the term ‘blooded’, meaning of pure aristocratic breeding.

This breed was used as a hunting dog in Medieval times in Europe. Then with the decrease in hunting as a pastime, there was less of a need for them so their numbers started to decline. However as dog shows became more popular in the 19th century, they rose to fame again, and were imported to America in greater numbers.

Find out the personality you can expect from this breed.
Calm and trustworthy with children, the Bloodhound is gentle and friendly. He also likes to play around and be active. However he can be stubborn and will need a firm and consistent owner. Bred for hunting game and tracking poachers, he is a determined tracker and loves to follow a scent.

With long droopy ears and wrinkled skin, this breed is large and their wagging tail can knock a child over. They have thick bones, and a short water-resistant coat. The Bloodhound’s ability to trail people is unrivaled. The evidence produced by this breed has even been accepted by a court of law, and they have been used to bring many criminals to justice. Police also use them to find missing people or children, and they are known for tirelessly following the scent for a long time.

Bloodhounds like to relax, but also are intelligent and need some mental stimulation. An apartment can be an adequate home for them so long as they are given a couple of long walks every day. They are large dogs and do need some activity.

A fenced in yard is ideal, so that they can run around without running off on the trail of a scent. However you do need to be aware that they are very good at escaping. They can tunnel under fences and climb over them as well. They also adapt to different weather climates very well, but will need a lot of water in summer. Also be aware that the darker color the dog is, the more heat he will absorb – so he will need shade if he is outside.

The Bloodhound is a friendly and gentle dog – ideal for a family with children. However they will still need to be supervised as they are large and easily knock children over. They can be aloof with strangers, and when they are on their own territory they can become aggressive towards other animals, although they are usually OK outside.

If you like a very clean house, then a Bloodhound is probably not for you, because they drool a lot. Their long ears drag and can get dirty, and both their ears, face and skin folds will need daily cleaning.

Fortunately their coat does not need as much attention and a weekly brushing is usually enough. A mitt might be better to brush them than an actual brush though, since you will need to be quite gentle. Grooming is only needed occasionally – once a month is usually fine.

Daily or weekly brushing is usually recommended for their teeth since they rot more easily than many dogs. They are also prone to ear infections, so you will need to keep a close eye on their ears. There is very little air circulation in the ear area and you should generally clean them every week.

Bloodhounds can be difficult to train, as they are stubborn and independent. It is best to start early on, before their behaviors get ingrained. They are sensitive, so positive reinforcement with rewards and treats works best. A firm and consistent approach is also needed, otherwise they will walk all over you!

Bred to be hunting and tracking dogs, they may wander off after a scent, so they should be kept in a yard that is fenced in, or on a leash. They tend to bark a lot if left outside over night, or if they are left at home by themselves for too long.

Even though they have a reputation for being lazy dogs, Bloodhounds are actually quite active and should have several long walks every day. A house with a fenced in yard is good for them, and also an owner who takes them on hikes or cycling. They are often at their happiest when they are tracking a scent, so you could consider enrolling them in tracking activities. Make sure they are on a leash when you take them out, as they may not listen to you once they are following after a scent.

The main thing to be aware of with this breed is that they are prone to bloat. So they should not eat all their food in one sitting. You can also raise their feeding dish off the ground a little so that they gulp less air when they eat. And there are food bowls available that will help them to slow down the rate at which they eat.

If you are getting a new puppy, ask your breeders for recommendations as to what to feed them. They will need to be fed three or four small meals a day between 8 and 12/16 weeks, then transitioned to three meals a day. From 6 months onward they can then move to two meals a day, although some owners prefer to keep it at three.

If they become picky about their food, make sure that you’re not feeding them too much, and then increase their exercise, and they should go back to eating properly. They are notorious for eating anything they can find. So be aware of food that is lying around, as they might help themselves.

Bloodhounds are prone to bloat, like many other large breeds. This is where the stomach gets filled with air and starts twisting and cutting off blood supply. It can be extremely painful and dangerous, so it is important that they get seen right away if they have this condition.

Hip Dysplasia is a genetic condition that they are prone to. Also because of their loose skin on their faces, Ectropion or Entropion can be a problem - where their lower eyelids roll outwards or inwards. Because of the lack of circulation to their drooping ears they are also prone to ear infections – so their ears should be checked and cleaned regularly.

Their folding skin makes them susceptible to Skin-Fold Dermatitis, where infection can build up in the folds of the skin due to excess moisture and rubbing. Cleaning and using medicated creams can help. If they are strongly affected, then the skin folds can even be surgically removed.

Hypothyroidism is another condition that can affect Bloodhounds. This can produce a lack of energy and their fur may start to fall out. It can be managed with a thyroid replacement pill that will need to be given daily for the rest of their lives.

Bloodhound How to Get One

Bloodhounds are often purchased without any clear understanding of what goes into owning one. There are many Bloodhounds in need of adoption and or fostering. There are a number of rescues that we have not listed. If you don’t see a rescue listed for your area, contact the national breed club or a local breed club and they can point you toward a Bloodhounds rescue.

Above are breed clubs, organizations, and associations where you can find additional information about Bloodhounds.